When Ollie Owens arrived (my fishing guide in Hawaii), I rubbed my eyes to make sure that I wasn’t seeing thing. 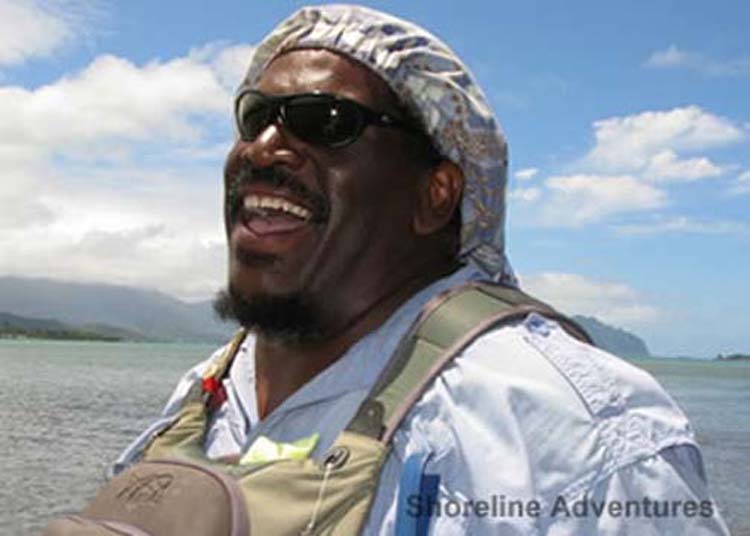 I had not smoked any Maui Wowie (the celebrated atomic grass) nor had I imbibed… more than usual. My guide looked like a walking, gigantic obelisk. The kinda of guy that, with his size and rastafarian hairdo, would scare the bejesus out of young midwestern girls from good white christian families. Bigger than life, with a voice that shook the walls when he opened his enormous mouth in laughter (which he didn’t stop doing), it was difficult to know in advance if it was to tell you a good joke (ogre that he is) or to devour you. It didn’t surprise me one bit when he later told me that, to feed his family, he had worked for a time as a bodyguard. But very quickly I realized that he was actually the most charming and the most competent of guides. I have never even dared to dream of meeting a guide like Ollie. If you ever have the chance to dangle your rod in Hawaiian waters, don’t look any farther, you’ll never find a better guide than this guy. 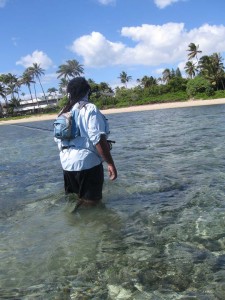 In 3 seconds he knew (it was easy!) that my competence in casting salt water flies was relative, so he spent a good half hour getting me up to speed: horizontal casts, turn your wrist like this, he pulled out all the stops and whistles, his language always graphic and poetic so that (allusion to the future regrets): “it wouldn’t hurt on the plane”. Don’t get it wrong, Ollie is not your typical guide: the guy who takes your money no matter what. No way, this guy thinks of one thing: “of the fisherman who dreams for months on end and is willing to spend half his retirement pay to catch an enormous bonefish in these islands of paradise, this Hawaiian archipelago; so I’m gonna do everything I can to make that dream come true”.  And there’s one thing that I learned fishing with Ollie on the Hawaiian flats, it’s that although the bonefish aren’t legion, there is a big cherry on the cake: they are ENORMOUS. A bonefish of 10 pounds or more is not rare and 18 pounds is the record.

We had waded the flats for at least three hours and everything was against us: the wind, the clouds (which transformed the water into a mirror) and my notorious incapacity to see those devilish fish especially when my eye was drawn to a vision that, instantly, made me forget fishing. 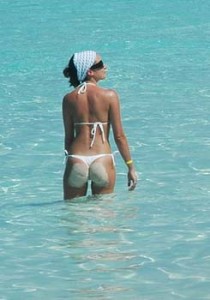 A magnificent girl arrived on a little beach, all alone, just there about 30 yards from us. She took out her beach towel and in order to spread it out, she bent over and offered me a picture of her splendid ass pointing skyward. In spite of my failing vision, the details of this knockout fully occupied my spirit. Holy cow, what the hell am I doing holding a fly rod in my hand instead of my dick? And sure enough, that was the very moment when Ollie whispered: “Fleche, there… straight ahead of you, 20 yards… BONEFISH!  Go for it!”

All distracted by my bathing beauty, I cast my fly like the most clumsy of beginners. Of course the fly landed exactly where it shouldn’t: on the head of the fish, who took off like lightening. That put an end to the fishing.  And what’s more, so that it hurts even more on the plane, when we got to the shore and passed in front of the lovely nymph, I realized the degree to which my eyesight is failing and at what point the ass was fat, leaden and unappetizing, the face wrinkled, the horrible bathing suit twisted, all a pathetic vulgarity.  IT’S GONNA HURT ON THE PLANE.