“OK, it’s at least a half an hour now that I have been trying to raise that wretched trout and I’ve had it. Try if you want. Im sure that she’s there, I got a glimpse of her yesterday; like a russian submarine. A real monster.”

The guy who said that is someone who I see regularly at the river. He’s loves to harass fish as much as I do… just as crazy as crazy as I am. Accepting his invitation I waded into the river and after a half hour I had tried all the flies in my box, from the most elegant dry-flies, to the most audacious streamers. Nothing worked. The trout remained indifferent.She must have been watching a football game on TV or messing around with some handsome fish. And I’d be the last one to disturb fish who are “messing around”, after all a little decency and humanity!

I returned to the bank and started to pack my gear. The guy was still there and a conversation started, which is usual among fishermen.

“This here’s a good spot, don’t you think?” he said with his Ardeche accent brimming with sunshine.

“Absolutely a good spot” I replied, “however I prefer the confluence. Where I’ve seen incredible runs!”

And like old friends we exchanged secrets of our favorite spots in the river.

“Surely you’ve fished the spot below the abandoned house, just at the curve when you leave Ruoms, no? It’s true that the descent to the river is a little precarious but the compensation is worth it.”

“Ah, I know well that diabolical “spot”. But I’ll never again set foot there for all the money in the world!”

“Wow, if you don’t mind, would you tell me the reason for that?”

“Well, here’s the story. It happened last autumn, on a magnificent day. I went fishing with my buddy Henri. I’m sure you’ve seen Ritou. A big guy, wild looking, with a long beard like Rip Van Wrinkle, you know who I mean? Doesn’t matter. Well, we parked his jalopy on the small clearing next to the abandoned shack and descended through all of the brambles to the river. There we separated. Henri took the path to the right toward the big flats; there are lovely fish hanging out by the little falls. I had taken the path to the left to the deep hole upstream. I hadn’t gone more than 200 meters when I saw a boar and her family of 5 or 6 piglets. Problem. The mother had just left her cover and I knew right away that I wasn’t invited to the party. The bloody hell of it was that there was no where to go, With my big pot-belly I’m not really up to competitive running; so for me, the only course of action was to climb the nearest tree as fast as possible. 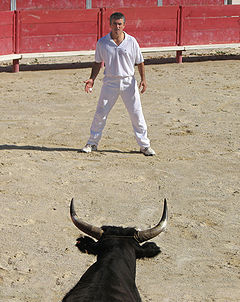 For five, very long minutes, Mrs Wild Boar camped at the bottom of the tree, her big head raised toward my buttocks. Then, suddenly she disappeared into the brush. Oh! but not for long, I assure you. I had just decided to descend from my branch when she reappeared. But this time she was not alone! The bitch came back with an enormous male, brown, gray, ugly as sin and mean as can be. It was then, my friend, that things took a turn for the worse.

It’s hard to imagine but the brute started to charge the tree where I was perched; repeatedly he attacked and banged the slender trunk with his head. The poor tree was giving signs of impatience, me too. I screamed with all my might “Henri, damn it Henri, come quick I’m in trouble, HENRI!” 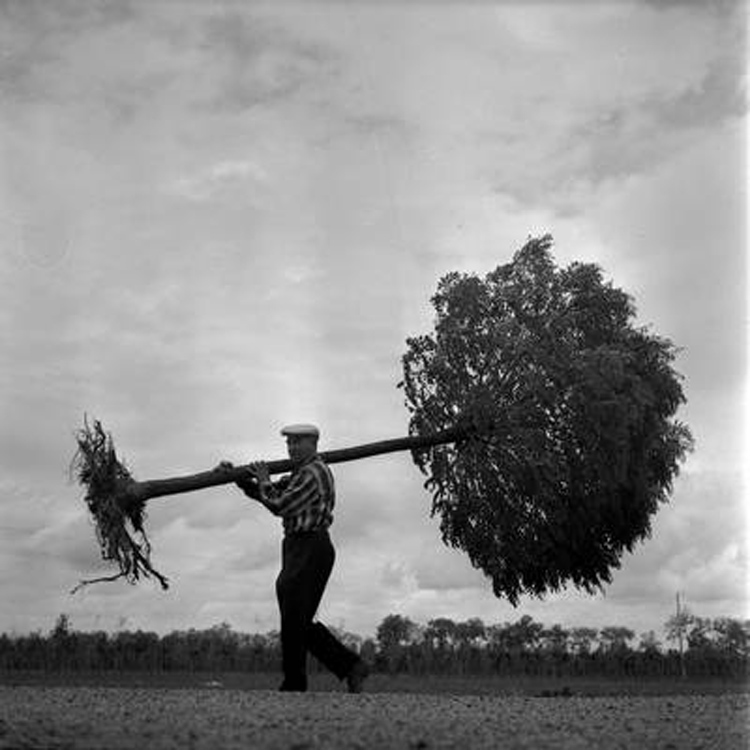 Happily for me there was a little wind from the north that carried my cries all the way to the ears of Ritou, 300 meters downstream. When he arrived after many, interminably long minutes of torture, I was on the verge of collapse and my fragile little tree as well. Henri, was not taken aback and started throwing big rocks at the wild boars. Henri is the “tireur”¹ in the “petanque”²  team of Saint-Alban and his rocks hit the mark, several real “carreau”³. I can’t begin to tell youhow it was! The monsters turned back on their path. My legs were trembling but I was still alive. OK, now do you understand why I won’t go back there?”

Even today I wonder if the story is true or if it’s the work of an overflowing imagination of this man on the shore of a river. But after all, I don’t give a royal damn. When there is a good story to tell (as, I don’t know who, said), who cares if it’s true?

1) Tireur: shooter who specializes in throwing the ball to knock out the oponents ball. 2) Petanque: game of boules played with a hollow metal balls in the south of France.  3) Carreau: knocking out the opponents boule while leaving your own boule the point of impact.