It was “Junior”, my portoricain buddy from next door who gave me the idea: “To get rid of jet lag my friend, there’s nothing better than the sun and a shot of tequila”.

As luck would have it, the day was radiant and I suddenly remembered that the East River was a few blocks from my house and in years past I have pulled out a quantity of little “snappers”. And what’s more, you can eat them and they are delicious. Just ask my wife. 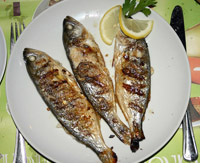 So I went to the cellar, grabbed my fly rod, an old reel and a few streamers with which I’ve had a huge success on the jetty at Fifth Street in Brooklyn.  You have only to let the fly sink a little, let it flow freely, give it a little bit of life and you can’t miss… voila, a little fish for lunch.

Even before arriving at the water, I noticed that our neighborhood had changed quite a bit during the 6 months that we were gone. First of all, what was obvious was the impressive number of young women walking with kids. You have to understand that five years ago you never saw a child in the nabe. 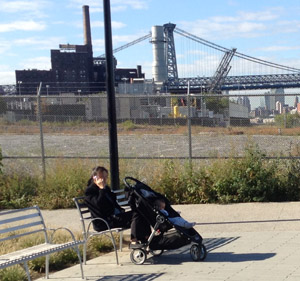 The streets were far too dangerous, with omnipresent dealers and gangs dictating the law… in short Williamsburg was hazardous and the edge of the East River was a no-mans land that looked like Berlin 1945. You know what I mean?  Burnt out car carcasses, obese rats and broken bottles, the shards of which flickered in the sun. That was the East River.

Today, immense cranes rapidly construct gigantic buildings that are ugly as fleas (sorry, my tiny friends for this unflattering comparison!). So I tried to think about other things while I attached my “Clouser minnow” at the end of the line and… listen at me, shit, damn it all, what am I saying… There I am fishing, and in front of me is the most formidable image, almost unreal, of Manhattan, like a magnificent erection on the other side of the river.

I bring in my line… and… nothing. And nothing during the next half hour, while usually, it’s a slam dunk.

I ask another fisherman aot the end of the jetty; “Are they biting today? Any luck?”

The guy responds in polish with lots of w’s and z’s and y’s, shaking his head which more or less means: “Not a bite!”

Returning home empty-handed I was thinking that the nabe was gone; all the newly arrived yuppies who spend thousands of dollars a month to live in Williamsburg must certainly be, at least partly, responsible for the disappearance of my dear fish. Ah, the joys of fantasy!

Walking on Metropolitan Avenue I noticed a gathering in front of the Polish church. Everyone in black.  Without a shadow of a doubt it was a funeral and all the people with mournful faces were speaking with w’s and z’s and y’s .

All at once it came to me… me too, I should mourn my river… bury my fly rod in in the waste land at the angle of Driggs and Grand Street, leave a little bouquet and finish up “Junior’s” tequila. So off I went.

When I got there, there wasn’t any waste land. There was a crane digging the foundation for a new luxury building. I just stood there riveted, like a jerk, with my damned fly rod and my jet lag.

P.S. This morning I took the metro (the “L” train) to do some shopping in Manhattan. In the metro there was a young woman not far from being the most beautiful girl in the world. A redhead. She was so fascinating that I forgot to get out at the “Union Square” station and found myself at 8th Avenue. Maybe there are less fish in the East River, but the chicks here are enough to drive you crazy and they certainly aren’t lacking in New York. Come and see for yourself, you’ll fall in love with this city just as I have, over and over, for the last 30 years. Guaranteed!!!! 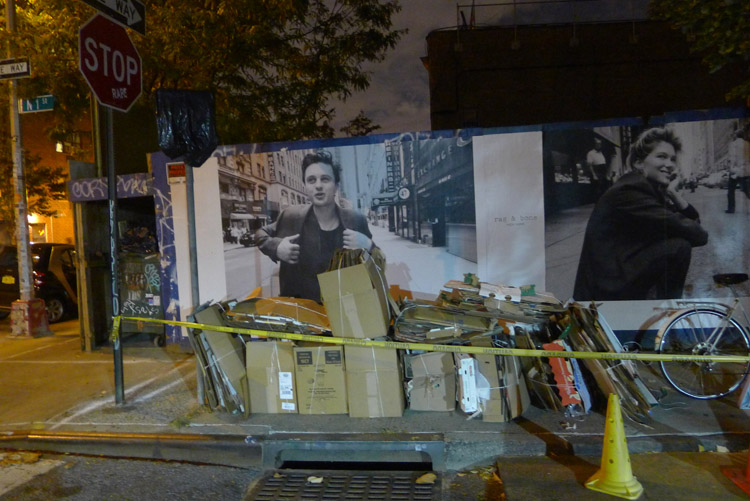