At the time that this story took place, my wife and I lived in a disaffected church in the Catskill Mountains, three hours from New York City. We froze our buns off in the church which is, I guess, normal. With a miserable bank account such like ours, how could one expect to heat a place like that?

One day a local guy, who probably took pity on me, helped me to stack logs for our wood stove and we became friends.

Knowing my passion for fishing, one night he called me to propose: “Fleche, what do you think about going salmon fishing with me tomorrow at 4 a.m.?”

“Great, I’ll come by to get you.  Don’t worry about anything, I have all the material that we’ll need.”

You can imagine that I slept  very little just thinking about the trip.

It was damn cold outside at four in the morning and in his 4×4 one of the windows was stuck so it wasn’t any warmer inside.

“We’re off!” declared Bob starting his lousy truck, “Off for PULASKI. Let’s go!” 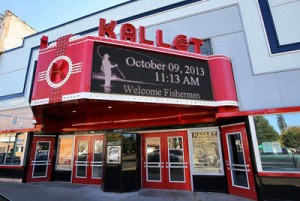 For those of you who don’t know (there must still be a handful!) Pulaski is the name of a shitty village at the edge of Lake Ontario, all the way north in the state of New York; it’s there that the famous Salmon River runs, a mythical place for guys who want to fill their freezer. At the time I didn’t know anything about it.

I also didn’t know, at that time, enough english to keep up an interesting conversation during this long voyage; Bob in any case was a taciturn guy and aside from complaining about the oil leaks in his dumb truck’s motor, the conversation wasn’t exactly passionate. To talk about literature, painting or music was out of the question. A small possibility existed on the subject of the ladies, beer, the freezer and the fucker Bill Clinton who wanted to regulate the sale of firearms… who does he think he is anyhow!

After a good three hours on the road an enormous billboard appeared: “PULASKI, the capital of fishing”  I really needed to see that to warm up my stiffened body and spirit.

Bob knew the region like the back of his hand and drove his 4×4 here and there, roads that were a threat to public safety, potholes filled with mud from the last rainfall, crossing rivers on wobbly bridges and finally he came to a stop and turned off the motor of his pickup truck.

“This is it Fleche. Take this rod and put this thing on the line.” 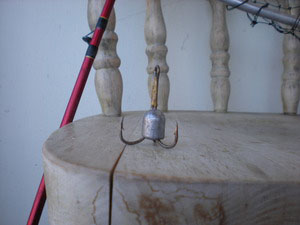 The “thing” in question was an enormous piece of lead with 3 hooks emerging; resistant enough to stop a TGV train in full speed.

Rivers, when the day breaks, are always of an astounding beauty and this one didn’t escape the rule. And for musical accompaniment, it’s difficult to imagine a more beautiful concert than the awakening of the birds in the area.

“Well, this is it” said Bob, “let me explain the fishing technique used here. In a word the river in this season is filled with salmons that leave the lake to go and lay their eggs. You just throw this “thing” as far as possible and you reel it back as fast as you can, jerking all the while on the rod to set the fish. You’ll see, it’s great fun! Go and install yourself over there about 50 meters, in that little break in the reeds and… happy fishing!”

“First of all let me watch you a little to see the technique in practice.”

It didn’t take long for Bob to “hook” his first salmon. A enormous “King” that he knocked out with a baseball bat. 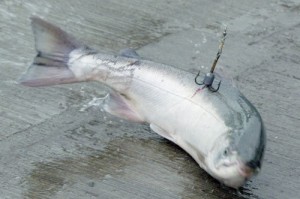 I thought to myself that this kind of fishing is not very sportive, but then, at the time I had never heard of “catch and release”. On the contrary, bringing home something to eat swept away any trace of morality.

It’s true that the river was filled with fish, for in no time I “fished” another King. By the dorsal fin. (I certainly hope that you didn’t imagine that I would take one by the lips!)

By the end of the afternoon when we headed back we were dead tired; in the back of the pick-up was a load of12 enormous salmons. I must confess that I wasn’t very proud of myself, and even more so when we ate them, the meat of the poor fish was absolutely disgusting. In reality the place where we were fishing these salmons was close to the area where they were going to lay their eggs and die, which also explains the suffocating odor that had me nauseous for most of that blasted day.

Not long after that New York State banned that “technique of fishing”. Bob was run over by a refrigerator truck as he crossed route 28 while reading “The Bible for Dummies” and one week after the accident his widow married an illegal Pakistani vegetarian. 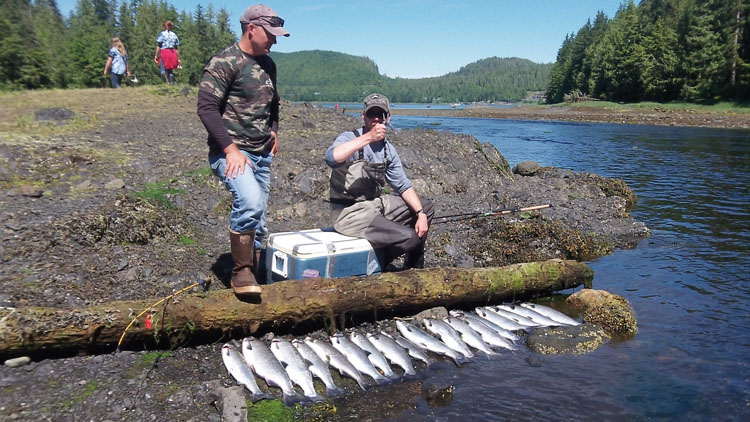