I had been in the river for quite awhile, just beyond the little cascade where I know that a band of fish take their siesta. I had taken a sleeping few and peacefully released them in their bed, without their even waking.

It was then that I saw it, the famous canoe, descending the river. Of course I started grumbling: “Bloody tourists about to wreck my fishing session!”

But as it got closer, when I saw the paddler, I held back all my insults. The reason? I’ll tell you: it isn’t everyday that a girl of such beauty, passes in front of your eyes. Pretty? Not really… enchanting is a little closer to the truth! And then, where the story takes on a little weight, when the canoe slowed down and our eyes met, the goddess smiled at me. Holy crap what a smile… like opium of the purest quality. I was paralyzed.

My line stopped swishing all by itself, my fly started sulking, and my jaw dropped open; I asked myself if this was just a vision, if I wasn’t a little unhinged by the Ardeche sun. 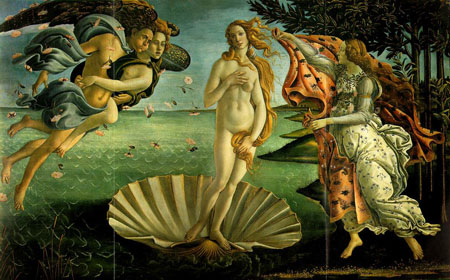 And when she beached her canoe near me, I saw that the Venus was wearing very little, quite like the Botticelli painted a few hundred years earlier.

Fluttering with emotion I tried, with difficulty, to drum up a conversion. (The lovely was Hawaiian and didn’t speak a word of Ardechois. As for me, I only knew how to say “Hula Hoop” in south sea island parlance, which considerably limited our verbal exchange.)

The beautiful Puanani (that was her lovely name!) had been baptized catholic, in error, by a drunken priest and she insisted that our union be legal in the eyes of the church.

Not so easy to unearth a priest in this remote part of the river. It was then that I remembered the book that I had borrowed from the local sorceress; a work that talks about the famous “Bishop-fish” and other bizarre facts of nature. 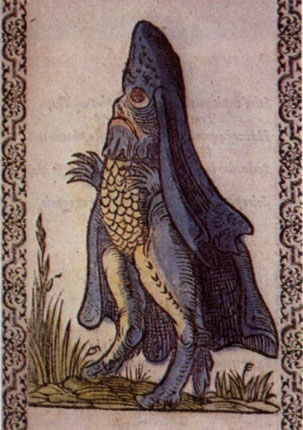 These Bishop-fish were fabulous creatures halfway between fish and man, closer to a siren; the scales on their head formed a miter (the tall headdress worn by bishops) while the fins mimicked the robe that the bishops wear while in office. These fish were described in the 16th century by the naturalists Belon, Gesner ,Rondelet and by the Doctor Ambroise Pare.

Fishermen once captured a Bishop-fish in the Baltic Sea in 1433 and took it to the court of the Polish king. The fish gave signs of wanting to return to the sea and the King granted his wish under pressure from the catholic bishops to whom the creature was presented. He thanked them with the sign of the cross and disappeared into the sea.

You might ask, how exactly does one fish for a Bishop-fish? Well, it’s quite simple says the book of magic spells.

Cleverly mixing the deer hair with pubic hair, you then fashion a fly in the form of a crucifix. Which I did right there and to my great surprise, on my first cast I captured one of these strange Bishop-fish who, without persuasion, married us then and there.

That was more than 30 years ago (how time flies!) and today the lovely Puanani and yours truly continue to be very much in love.

(Of course, immediately after the marriage ceremony was concluded, we released the Bishop-fish!)

“One must not kill!” …insists the Gospels.