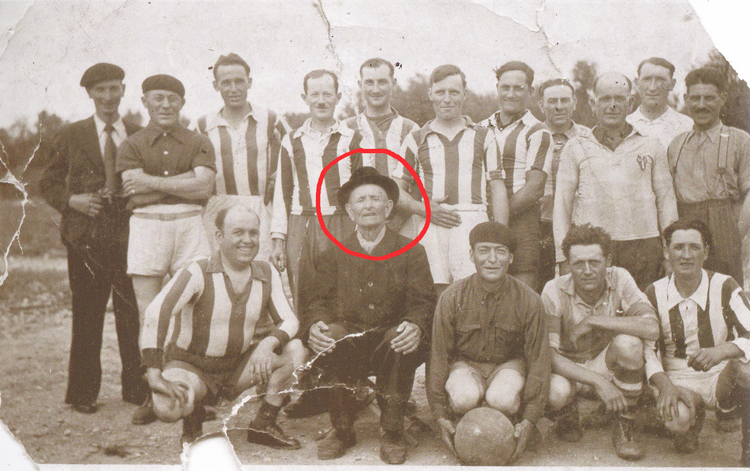 Just beyond the Chassezac Bridge is the village of Maisonneuve and every time I cross the village, it is an immense pleasure. Not that the village is particularly exciting, no, it’s a banal Ardeche village, neither lovely nor ugly.

The village is on the principle route that I use when I go fishing. Each time I pass by I am obliged to stop my motorcycle; each time I am blown away.  There is a house, of not great character, but in front of it sits an ensemble of “sculptures” cobbled together in cement and bits of scrap iron. Sculptures without age, half-way between the fabulous sculptures of Easter Island and the unpredictable objects that children fashion to annoy adults. 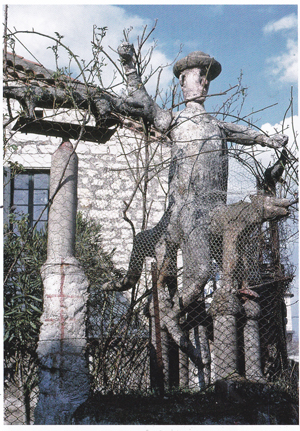 Nothing to do with Michael Angelo or the great classical sculptures in history books. No, these objects are closer to those that Jean Dubuffet christened “Art Brut”, and they are charged with a singular magic and a good dose of humor to top it off.

Decidedly, the individual who constructed these pieces was a sacred rascal. There is a sign in cement, roughly engraved by the hand of the artist, with wavering letters professing his beliefs. All of that could not have enchanted me more, until last year, when I passed the village on my way to the Chassezac and almost lost control of my motorcycle.

All of those marvelous works had disappeared, replaced by a gate of an extreme banality and ugly to boot. Damn, I was on the verge of tears with rage. One more time they wrecked something that had bestowed charm on these old Ardeche villages, replacing their immense beauty by crappy architecture of an incredible poverty. I remember the film of Eric Rohmer where Fabrice Lucchini said: “We have to put an end to the death penalty EXCEPT, for architects!” I’m compelled to support this declaration in the interest of the public good.

Last week, helped by a little luck, I came upon a timid little volume tracing the life of that unusual man who had constructed those unusual tribe of objects. 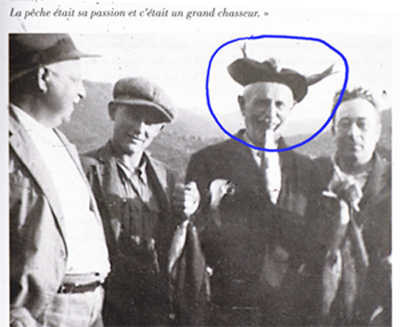 He went by the name of Alphonse GURLHIE, born in 1862 in the hamlet of Masionneuve in meridional Ardeche and at a tender age he bonded with all the wild animals around the village and cavorted with them from rock to rock in the woods of Paiolive; he was in love with all the incredible nature surrounding him at that time. He learned to fish with his hands, taking everything he could; both day and night he tamed many furry creatures in the forest.

Whenever an unfortunate person got lost in the woods, who would they call to the rescue.  Alphonse, of course!

To sum it up he became a man of the woods and entirely fascinated by the incredible rocks, some of which symbolized the combat between a lion and a bear or rocks that showed other animals like a girafe or an elephant “affectionately sculpted” by the crazy nature of the Paiolive forest. 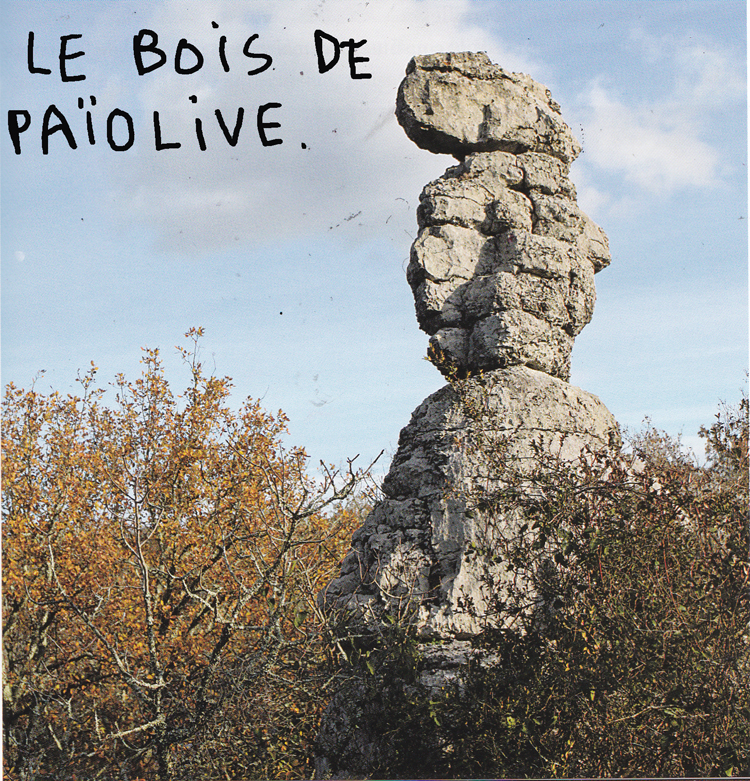 On returning from his military service, he readily became known in the region by all of those who liked to eat a good, fresh, fish-fry; everybody called Alphonse. (He was also well known by the game wardens, whom he avoided.)

This happy and passionate life continued in the woods until the moment when he decided to become a sculptor. And that’s where it becomes admirable. 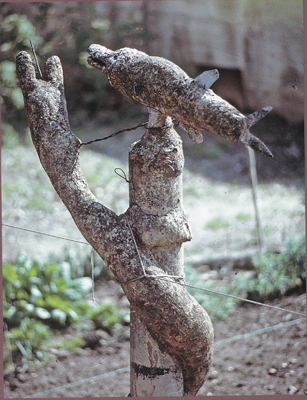 Maybe he had heard talk of the “Palais Ideal” (Ideal Palace) of the FACTEUR CHEVAL (the postman, Mr. Cheval) who spent 30 years building his palace in the village of Hauterive, Drome (the neighboring Department).

Well, Mr. GURLHIE set about telling the story of his life as a man of the woods in cement and scrap iron. He amused himself like a child, like an uncommon man; he was radical, anticlerical and nonconformist, he was a visionary and like the facteur Cheval, he also constructed his tomb that has the inscription: “Sepulcher of the neolithic era, Alfonse GURLHIE born February 1,1862” He was buried there on October 8, 1944.

Happily for us, all of these magnificent sculptures have been rounded-up and disposed in front of a little museum in the neighboring village of Chandolas and believe me, they’re all well and as full of tingling life as in the past.

GURLHIE is probably well installed in paradise, amusing himself creating traps to capture angels for their feathers so that he may fill feather quilts… sometimes nights are cold up there.

He must sell them very well, his angelic quilts and he must make tons of dough. The good Lord, it seems, is green with envy. 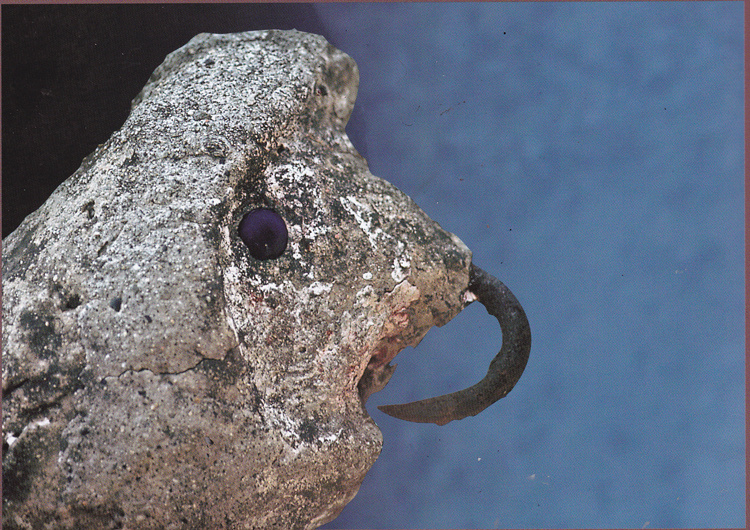 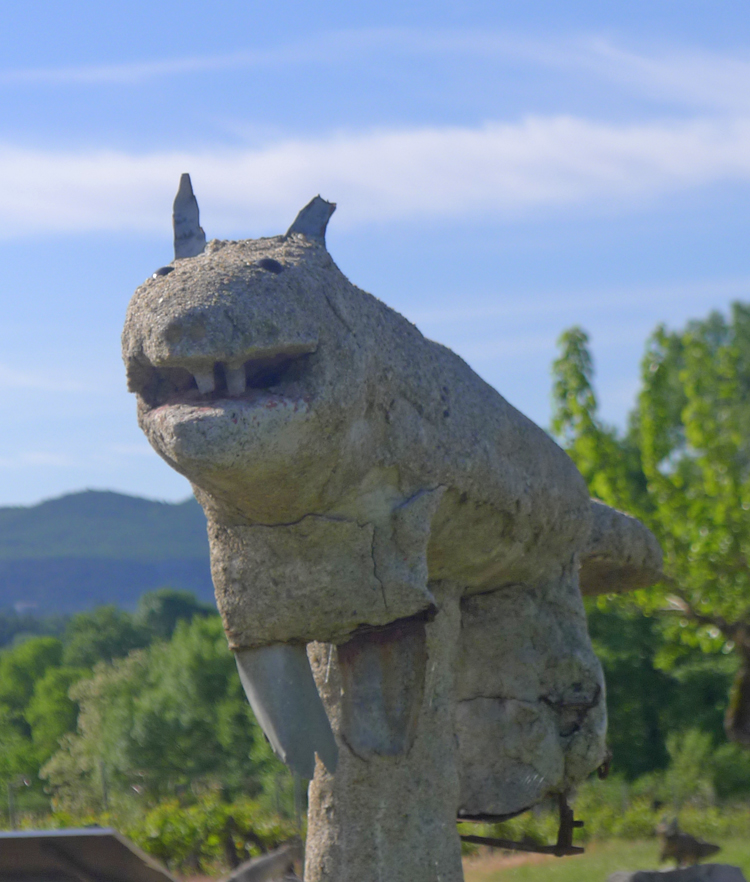