Junior, everyone in the neighborhood knows and adores Junior. We should mount a statue with flowers for my friend, for his services rendered to the community. Think about it! The incredible number of adolescents in distress that he straightened out, the young druggies or dealers of all sorts, apprentice gangsters and river rats. He taught them to pull themselves together, stand tall and work hard instead of finding themselves in prison; right there, on North First Street: “You dismantle the rotten motor of this Chevrolet and you reassemble it, you do it like this… all nice and clean, like when it left the uterus of it’s mother!” 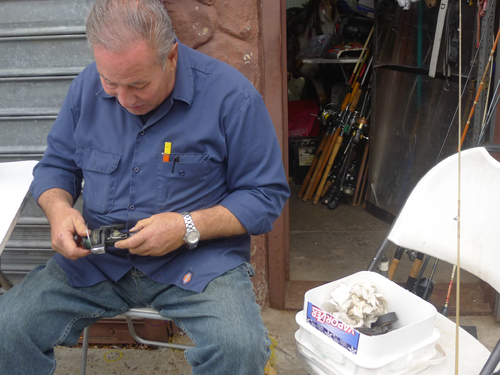 Last monday I saw him, protected from the sun beneath his awning, sitting on a camp chair. Well installed on the sidewalk, he was in the process of fixing something (as usual), except that day he was repairing reels from another age and patching up fishing rods that looked ready for the garbage heap.

“What are you doing Junior?”

“Well… As you see Fleche I’m repairing some fishing material.  It’s to give to the boys in the neighborhood and when I’m finished we’ll take off for the Rockaways to torment the fish and the crabs.

“Whoa… Wait a minute… I’d love to go with you. In fact my fly rod will get arthritic if I don’t take it out of it’s case and give some air now and then.”

“No problem, Fleche. I’ll warn you in advance as to when and where.”

“Will you go out on your boat?”

” You’d better believe it my friend. I just changed the carburetor and if you wanted to, you could cross the Atlantic and go back to France. No fooling!”

“In fact Fleche, have I told you about our outing last month with Oscar, Dennis and the gang from the neighborhood?” 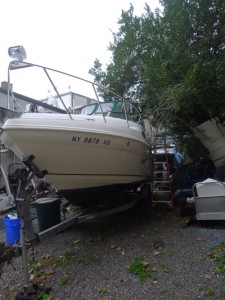 “Well here’s what happened. We decided to go fishing in Long Island, near the Hamptons; we left about eight o’clock in the evening with bottles, a picnic and of course, the girls… as you can imagine. The boat charged along by itself, I didn’t have to do anything. One would say a well-trained dog who knew the path to his food.”

“The sea was calm like extra virgin olive oil… first cold pressing. Oscar was the first to uncork his bottle of tequila, the “BARIO QUEEN” if you please! Dennis had to go one better with his vodka; a very dangerous thing! So much so, that toward midnight we threw out the anchor and were soon snoring like buzz-saws. Even the women joined in the orchestra. We forgot all about fishing, content to be rocked by the swells. It was heaven!
Until about 3 o’clock in the morning that is, when things started to go wrong. I want to tell you something Fleche, and don’t forget it: When the sea is too calm, it’s hiding something that’s not catholic!”

“Anyway, there we were, trapped in the middle of a mother-fucking raging storm. That’s all I’ll say. And like a cherry on the cake, the anchor had worked it’s self loose and we had drifted so far, that we could no longer see the coast of Long Island.”

“In other words, I hadn’t the least idea where in the world we were. Lost at sea…”

“The boat was menacing to capsize at any moment. Fuck, we weren’t all that far out and I really thought that we would be transformed into dogfood for hungry sharks. The women were screaming with fear and when they weren’t screaming they were vomiting all over us. Happily, the enormous waves cleaned up the stink.”

“Wow, Junior, how did you get out of there. Clearly you’re still alive, no?”

“We were in hell’s kitchen, I tell you! As luck would have it, the coast guard that patrols that area fished us out just when the boat was almost filled with water, in spite of all of our efforts to bail it out.”

“But hold on Fleche. That’s nothing compared to the time that Oscar almost got his dick bitten off by a shark; last year we went fishing for crabs near Coney Island…”

At that moment I started to think that perhaps going fishing with my Puerto Rican friend was not the best idea of the year. I pretended to have a terrible cold the day that he called for the famous fishing trip with the neighborhood kids.

PS: Since that time, Junior told me that he and his friend Dennis bought an old helicopter stashed away in a garage in Long Island City and they are going to restore it.

“And where will you put it once it’s fixed up?”

” Well, I don’t know… probably park it at the curbside next to the boat, what a stupid question”

Voila that’s Junior, my friend on our little street in Brooklyn; North First Street is, most certainly, the most beautiful street in the entire world.” 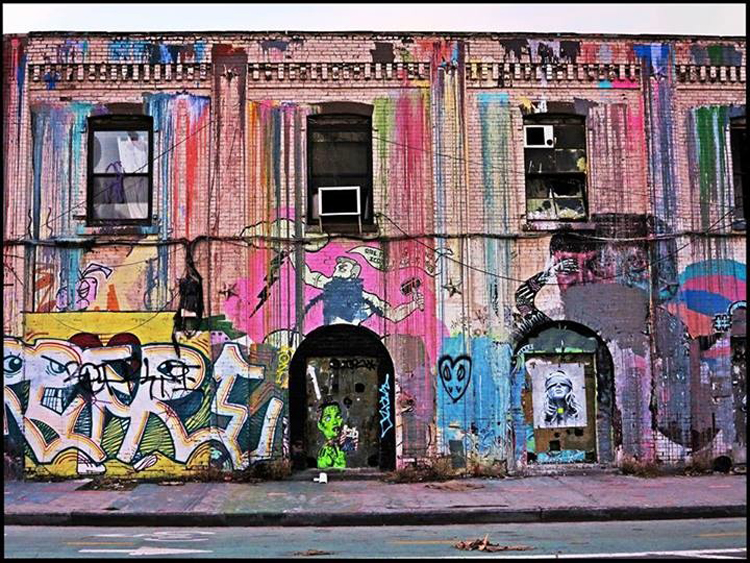