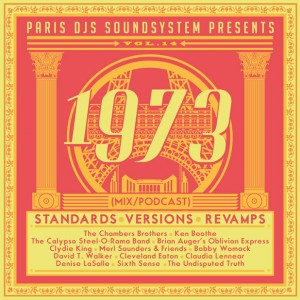 Spring is here, I wen to the river, waters were too high, cold and murky, as usual. Sometimes I can drive to river Tarn further south, where the sun heating the cliffs make the temperature a little warmer and you can spot a few marsh browns,  but this time all I could spot were cars and other fishermen who were already trying the best spots. I walked up to  the car, started it and turned on the music.

This mixtape is a jewel, all I can advise you to do is to download it, play it in your car, you won’t even realize you’re driving when playing it and if you’re tying up flies, I can promise you you’ll tie the best one and all night long! Once more, thanks Paris DJ!

01. The Chambers Brothers – The Weight
(from ‘Unbonded’ album, 1973 / AVCO)
THE BAND cover, more info on wikipedia

‘The Weight’ is a folk rock classic released early 1968 by The Band, and subsequently covered by a LOT of people. in 1973, American soul band The Chamber Brothers recorded a wonderful funky/gospel version, which was released in 1974 on their “reunion” album ‘Unbonded’ (after disbanding in 1972!).

A 1969 soul hit for Syl Johnson exploring themes of African-American identity and social problems, Is It Because I’m Black ? sung by Jamaican legend Ken Boothe is still a serious statement of black pride, but the original sad funk-blues groove has been replaced by a deeply resonant one drop reggae riddim, fitting so nicely Mr Boothe’s soulful lamentations. Powerful stuff.

Jamaican roots reggae and dub record producer, melodica player and keyboardist Augustus Pablo recorded his classic dub tune ‘Java’ with producer Clive Chin in 1972. The following year, it was released on a steel drums record for tourist in Trinidad, and thanks to Soul Jazz Records and their ’90 Degrees of Shade: Hot Jump-Up Island Sounds From The Caribbean’ compilation, it has infectiously found its way crawling into our minds, just in time for this selection!

First recorded by Roberta Flack in 1969, Compared To What became really famous thanks Eddie Harris and Les McCann’s live album from the same year, ‘Swiss Movement’, which included a mind-blowing 8 minutes version of the song. Released as a single at the time, it sold over a million copies, allowing songwriter Gene McDaniels to stop singing in night clubs. Covered hundreds of times, ‘Compared To What’ is a true soul jazz classic, but the Brian Auger’s Oblivion Express’s version adds new depth to the original composition, Brian’s Hammond playing is just somptuous: this is just progressive soul-jazz at its funkiest.

American soul singer Clydie King is mostly known for her work as a background singer — for the likes Ray Charles, Bob Dylan, Humble Pie, B.B. King, Lynryd Skynnyrd, The Rolling Stones, Joe Cocker, Steely Dan and many others. She also released many singles between the mid-50s and the mid-70s, and three albums between 1972 and 1976. The second one, ‘Brown Sugar featuring Clydie King’, released in 1973, contains a slowed-down, soulful & brassy take on Sly & The Family Stone’s ‘Dance To The Music’ we couldn’t pass on.

‘After Midnight’ was composed by American laid back boogie master J.J. Cale way back in 1966, as a b-side to the Slow Motion single. Eric Clapton made a hit out of it in 1970 and it became a rock standard. It was covered many times but the most notable takes come from various jam bands all over the years: Jerry Garcia Band, Phish, Phil Lesh & Friends, The Disco Biscuits, Steve Kimock, The String Cheese Incident, Gov’t Mule, Moe., Yonder Moutain String Band and many others, including the Merl Saunders & Friends group in 1973, with Jerry Garcia, Tom Fogerty of Creedence Clearwater Revival, John Kahn, and Bill Witt. Forever a classic.

07. Bobby Womack – Nobody Wants You When You’re Down and Out
(from ‘The Facts Of Life’ album, 1973 /
JIMMY COX cover, more info on wikipedia

A blues standard written way back in 1923, ‘Nobody Wants You When You’re Down and Out’ was popularized by blues singer Bessie Smith in 1929, oddly prophesing the Wall Street crash 2 weeks later. The song is one hell of a humility lesson, and Bobby Womack’s version, opening his 1973 album ‘Facts Of Life’, might be one of the soulfulests.

09. Cleveland Eaton – Slipping Into Darkness
(from ‘Half And Half’ album, 1973 / Gamble)
WAR cover, more info on wikipedia

After recording War’s classic tune with the Ramsey Lewis Trio in 1972 for their ‘Upendo Ni Pamoja’, american double bassist Cleveland Eaton released his own version on his supa-funky album first ‘solo’ album ‘Half And Half’. Get this record, it’s a classic!

With notes by our friend Pat Thomas & quotes from Claudia Lennear herself, this CD reissue from 2 years ago is not to be missed. Originally, the LP had one ‘rock’ side produced by Ian Samwell (America, Small Faces), and one maaad ‘funk’ side written, arranged and overseen by New Orleans’ Allen Toussaint. The reissue adds a fantastic ‘demo’ track produced by Ted Templeman, a cover of a Little Feat track from their ‘Dixie Chicken’ album released january 1973 (an in-house Warner Brothers affair since all the players were signed by the same label at the time), worth the purchase alone.

11. Denise LaSalle – There Ain’t Enough Hate Around (To Make Me Turn Around)
(from ‘On The Loose’ album, 1973 / Westbound)
LEON HAYWOOD cover, more info on wikipedia

Extracted from Denise LaSalle’s second album on Westbound Records, a gem of down home southern-fried blues and soul, ‘There Ain’t Enough Hate Around (To Make Me Turn Around)’ is a Civil Rights anthem originally released summer 1972 by Leon Haywood. Denise LaSalle’s version just rules.

Recorded in the early 1970s in Oakland, California for Ray Dobard’s Music CIty shop, studio and record label, but left in the vaults, this funky instrumental version of Wilson Pickett’s ‘Don’t Knock My Love’ was liberated by BGP (for ‘Beat Goes Public’!) in 2011 on the ‘Super Funk’s Mission Impossible’ compilation by legendary selector Dean Rudland.

13. The Undisputed Truth – Law Of The Land
(from ‘Law Of The Land’ album, 1973 / Gordy)
NORMAN WHITFIELD cover, more info on wikipedia

Featured on The Temptations album ‘Masterpiece’, ‘Law Of The Land’ appears on the album of the same name from The Undisputed Ttruth the same year. Both were Norman Whitfield productions, which one is the cover of the other doesn’t really matter much, since both versions are splendid and rather different one from the other. Check our mix ‘Norman Is The One!‘ for more of this kind of psychedelic soul goodness…