Going back to Montana is the best. After a few escapades in the South, I was longing for this trip back to the beautiful rivers (Yellowstone, Missouri and the Madison River). And more over, I was in great company.

I don’t always read the book’s back cover and that was the case here. I read it once I had read the book and when I saw Craig Johnson’s quote (Longmire’s dad, the cousin of Wyoming), I knew my guts were right. But let’s talk first about the storyline : 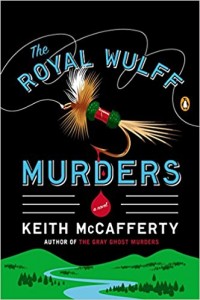 Rainbow Sam, a local fishing guide, reels in the body of young man on the Madison. He calls the Sheriff Martha Ettinger who immediately suspects foul play, mainly because the victim has a Royal Wulff trout fly stuck in his bloated lower lip.  When she goes back to the crime scene, she meets Sean Stranahan, a fly fisherman who has moved here not a long time ago. Sean, a painter (art painting), was once a private detective in another life in Boston. But after a failed marriage and a mild depression, Sean follows his guts and moves to Montana. The man is still an unknown artist so he plays the fishing guide when asked to and when a beautiful Southern singer, walks into his life and hires him, he can’t say no. The two are a pair though Sean knows she’s hiding things.

When the deceased’s identity is revealed, Sean knows it’s Velvet’s young brother. Going back with Sam on the river to investigate, Sam is shot. Sean is too close to the investigation and Martha decides it’s best to keep an eye on him by hiring him as “a consultant”. The clues lead Stranahan and Ettinger back to Montana’s biggest business : fly fishing. Fly fishing means big money, investors, builders, billionaires. And trouts. And of course, crime.

The reading was great, I loved the rhythm and the fact that McCafferty knows what is talking about. Of course, if you’re not a fly fisherman, it can sometimes be hard to understand all the technical terms, but McCafferty knows how to associate the beautiful nature to fly fishing. The “Big Sky” state is beautifully described and when Sean goes fishing, wearing his waders, we, as readers, call feel the current surrounding our body, the sun descending. The nature as its best.  Also, I enjoy reading about the “invaders”, the billionaires who have bought lands to come fly fishing and how this activity is linked to money and when the trouts get ill, it touches the core of the local economy.

I also enjoyed the way McCafferty describes the feelings of the locals towards the newcomers. It’s funny and smart, and witty. I also noticed how long the author took to describe Stranahan’s past or Ettinger’s profile and I was thinking the whole time : it sounds as the beginning of the series. I should have read the back cover because that’s exactly what Craig Johnson said.

The Royal Wulff Murders were published in 2012 in the US, and since Sean Stranhan has appeared in five other stories. It was just translated into French this year.

Last year, I had noticed the series on Goodreads and told the Mouching’s editor I was interesting in reading them. He didn’t quite notice. Now it’s in French, and I was indeed right to be interested ! It’s fun, it’s witty and well written ! And of course, it’s a mandatory reading for fly fishermen.