I must admit that I’m always attracted to stories about war, Larry Brown’s Dirty Work and Phil Klay’s short stories for instance.

In May 2011, Sara finds out that her only child, Jason, member of the SEAL has gone missing in Afghanistan. Sara has raised Jason on her own. Jason’s father, David, a member of the CIA was killed during a mission in Saudi Arabia years ago. When the news report Jason’s missing, Sara’s house is under siege by local and national medias. Sam, a former SEAL and best friend with Jason moves in with her, to her relief. 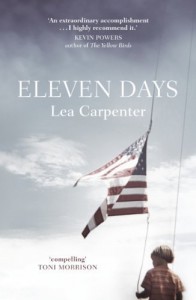 The waiting turns into an ordeal for Sara, all of sudden she remembers all the 27 years with Jason. Who is her son? He was a very smart kid. She can’t explain why he chose to enlist. When David died, his friends decided to sponsor Jason and to offer him the best education possible. All members of the Capitol, they had planned for him a great career in D.C. But after 9/11, Jason decided to join the military Academy. What she didn’t know is that as, as a teenager, Jason was secretly training for the special forces. But ten years later, Jason thinks differently. He starts to wonder about his future, and even thinks of going back to school. He’d love to get married. But as a born leader, he’s a one of a kind for the US Army and his superiors wants him to stay. But Jason has decided otherwise, this fourth tour will be the last.

But he goes missing…

Don’t trust the blurb : of course, it’s a story about a mother and a son, but the real story his Jason’s, all his trainings, his missions, his life as a member of the SEALS.

The author, Lea Carpenter, is herself the daughter of a member of the Army Intelligence and she goes in full details to describe the recruiting methods of the SEAL (a glossary is even added at the end of the book). She tells about the four stages of recruiting (endurance, fighting, mental resistance, etc.), how Jason passed all of them when others failed or quit. I didn’t like Sara’s judgmental behavior towards them. She mocks them for failing.  Sara is annoying when she talks about her son, “a thinking warrior” – she puts him on a pedestal.  She doesn’t want to see her son as who he is really. She just realized that yes, being a soldier, means to put your life in danger!

But the book takes a saving turn when the narrator is no longer Sara but Jason himself. When he talks about his tours in Afghanistan, his friendship with Kipling – it’s really good. Jason was nicknamed “the Priest” because he knew so much about literature and all that. He never judged his friend when he quit the SEALS after two years of training. Jason tells us how he has changed and grown and how he imagines another future for himself. I couldn’t stop reading this part because I really enjoyed it.

I, however didn’t like the ending – the twist (sorry no spoiler) which was, to me, completely useless and the ending, which sounded –  well too patriotic. The symbolic : the son has become a martyr, a hero – is too much for me. Jason is a person, a great human being.

Overall, I want to remember the second part with Jason. I still feel some tenderness towards him and I have a thought for these very young soldiers, who enlisted after 9/11 not fully understanding the consequences of their actions.