In 1991 the French rock band Elmer Food Beat sang “le plastique c’est fantastique” to raise awareness about condoms. Almost 30 years later, they come back with a cover of their own tube for another fight, the plastic in the oceans and it’s not Nikolaj Korsholm who will contradict me. #plasticinthebasket in interview for Le Mouching.

Hi Nikolaj, I am delighted to do your interview and give you the opportunity to talk about the #plasticinthebasket movement. But before you do that, please introduce yourself.

Hello, my name is Nikolaj Korsholm and I am 30 years. I live in Copenhagen, but originally from the countryside, where the only thing you can do is hunting, fishing and starring at endless sunsets close to the ocean. I am doing all three. In my daily life, I am working with #plasticinthebasket as a hobby and working with marketing.

And the fishing in all this, what motivated you to take a rod in your hands?

My family has always been drawn to nature. Everyone else was hunting, but I decided to pick up the fishing rod instead. My role model was a young angler, who was travelling the world, so I would see pictures, hear stories and before I knew – I was stepping in his footsteps and travelling the world with my fishing rod.

You say: “My role model was a young angler, who was travelling the world”. Who is he?

This guy is Jakob Sørensen. He is now working with Geoff Anderson and he was at the time working in the company my dad was working in the fishing department. He inspired me a lot and also took me fishing.

When did you start picking up plastic waste and throwing plastic in the basket? What was your motivation?

It started on Session Bornholm. Session Bornholm is an event that gathers flyfishers. When coming back from a long trip, I was walking with my buddy and saw the trash lying there on the beach. 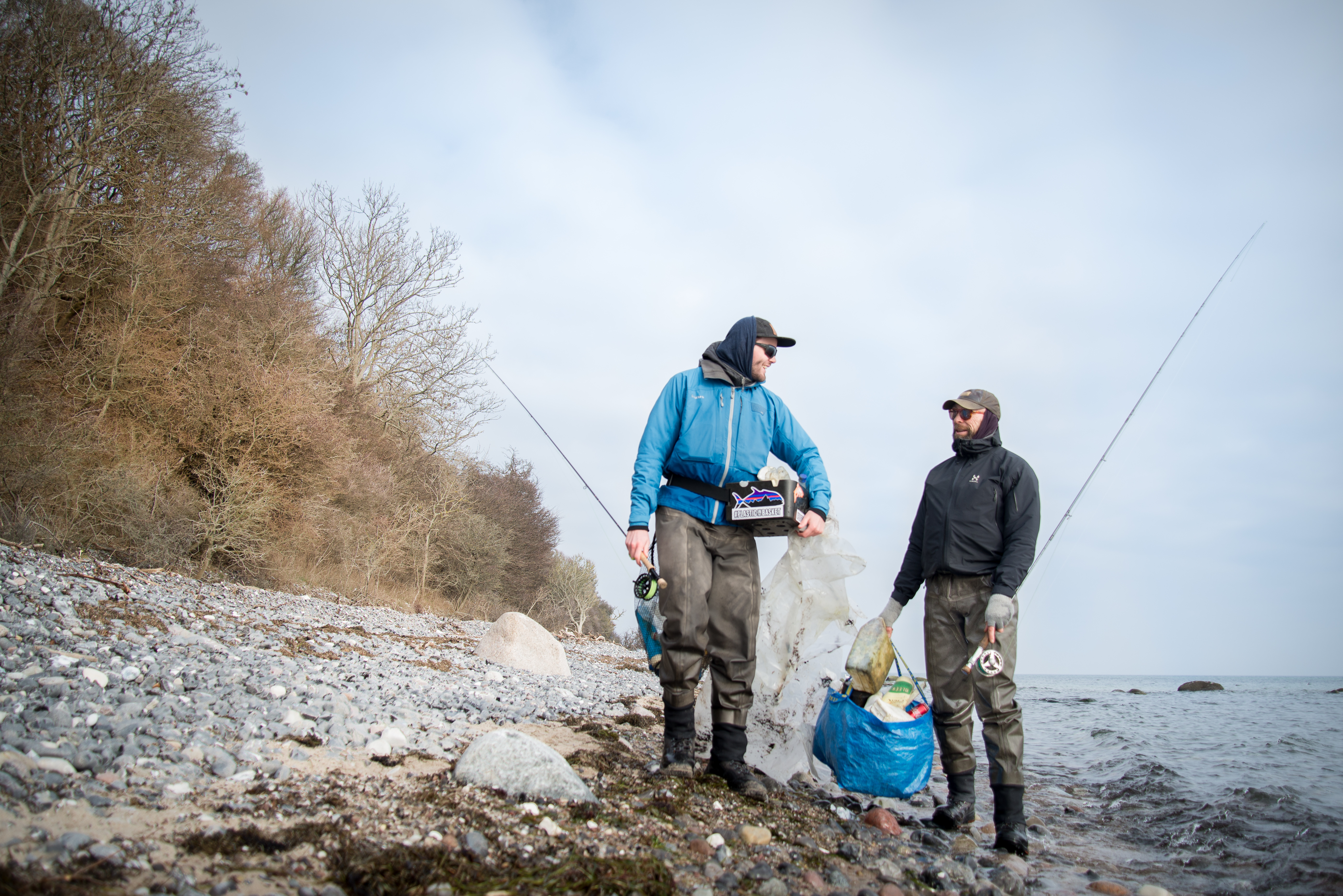 With me, I had a linebasket on my hip. I started collecting trash, but after 1-2 min, my basket was full and it felt like I was just a drop in the ocean. I realized that I needed help, so I came up with this kinda stupid shoutout #plasticinthebasket and put it on my Instagram.

How did your entourage react? Were you joined by other people? Do you have external support (brands, cities, associations…)?

The reaction was immediate and a few guys started to use the hashtag, but it was not until we released the first inspirational Facebook video that #plasticinthebasket had wind in the sail. After the video, we were on Danish TV, in magazines and the international flyfishers community was already starting to notice.

How can we help (in addition to picking up waste)?

Be the example. Take photos, say why you think it is important and share your thoughts with your friends, on social media or make a small event. One man or woman is not enough; we need to be many in order to make an impact.

How much waste have you collected since you started?

Not much, I think only around 100kg maybe, but I count how many I have inspired. I know I will never make an impact by myself, but sharing photos, videos and inspiring people is my goal. We do not wish to point fingers, but become part of the solution. The fight is political, but we are the inspiration to the leaders. So, we have more than 2000 people who have used the hashtag. If everyone picked 3kg each, this is 6 tons of plastic. See this is the point of #plasticinthebasket – Inspire others

What is the most unusual object you have collected?

We have found toy guns, condoms, refrigerators, but the most unusual was Allan Overgaard, a Danish flyfisher, he found a training artillery shell.

What are your future projects? And for plastic in the basket?

#plasticinthebasket was funded this summer by the Danish Environmental Protecting Agency. We made stickers for people to put on their baskets, beach flags and videos to inspire, but our most important goal is our national #plasticinthebasket day we will launch in the spring. We will facilitate a platform where people can organize their own #plasticinthebasket event. We hope to have hundreds of events all across Denmark and make a huge impact – Hopefully, collecting around 15 tons in one day. It is a big number, but we are dreamers. 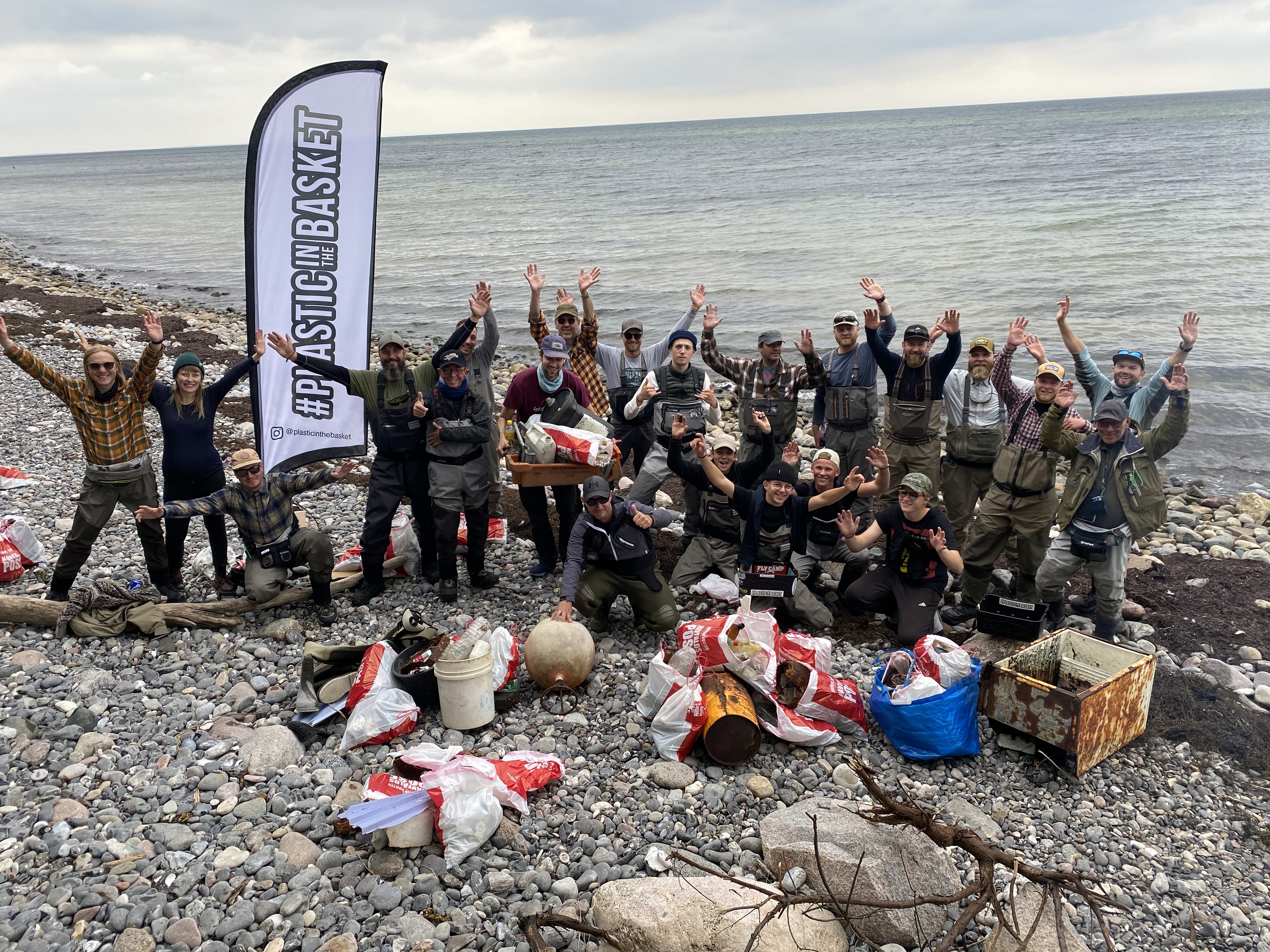 Where we can buy the stickers?

You will soon be able to buy them at Nordic Anglers. We are close friends with Daniel D. Holm.

At The Mouching, we like music and books, what are you listening to and reading right now?

I am listing to Stormzy and Lucas Graham at the moment; Stormzy to get me pumped up and Lucas Graham to calm me down. The book I am reading is a book my friend Gordon P. Henriksen wrote. It is called “Et liv i fish”, which means “A life with fish”. It is not the ordinary fishing book, but more about food, friendship and then it has a section with #plasticinthebasket.

I thank you for the time you’ve given me, do you want to add anything?

We are three people working with #plasticinthebasket at the moment. Morten Haven Hansen, who is a very keen angler and has been part of #plasticinthebasket from the beginning and now also Cathrine Ibsen, who just started fishing, but already caught her first seatrout and she is though! She will stand in waders all day until the light is gone.