THE DANGER OF FISHING.

A particularly violent and unexpected blizzard halted our plane on the tarmac at Denver, Colorado, delaying our flight to Billings, Montana where I was meant to pass 2 idyllic weeks (according to the prospectus) trout fishing.

As I hate to dispense money for overweight baggage, over my clothes I had put my fishing vest, my waders and the full array of the perfect fly fisherman; decked out like this, I looked like the “Michelin man” out on a picnic.

Sitting in one of those infamous establishments that, like in all the airports of the world, have the audacity to call itself a “restaurant”, I suffered a cottony hamburger when a man appeared before me.

“Hello!” he commenced “are you a fisherman?” (What insight I thought, almost out loud!) “Can I join you?”

He pulled over a chair and ordered a double whisky with a slice of lime, two ice cubes, a drop of Angostura and a straw. Judging from his looks, I put him at a solid 85 years old . He appeared sad and drawn with a comportment that suggested someone at the end of his rope.

“Me too, mister” he continued in a subdued voice “like you, I too was a fly fisherman, but I stopped 3 years ago when I was 40 years old. You might well ask why I stopped; so if you permit me, I’ll tell you my tragic story.”

“It goes like this: I had just purchased a brand new fishing rod (the name escapes me) and I found myself on the famous Deschuttes River in Oregon with a view to getting one of those marvelous steelheads. I started a cast when suddenly a treacherous gust of wind sent the hook into my right eye; 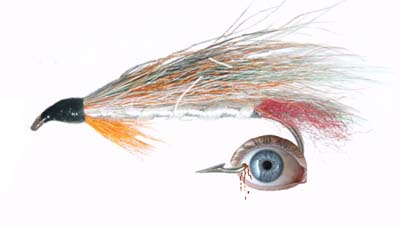 the cast, already in motion, launched the lure (charged with my eyeball) into the stream and an enormous fish seized and swallowed my eye. And that is the reason why, my friend, I wear this dreadful eyepatch; it’s to hide the black cavity that used to be my eye.”

“Of course I rushed to get medical assistance as quickly as possible but slid on a mossy rock, in spite of the non-slip soles on my shoes (a rip-off as far as I’m concerned!) and I fell head first into particularly vicious stinging nettles. You might say that’s pretty benign, to which I would respond that the calamity came later, for in those woods, quite tranquilly, lived a family of particularly aggressive snakes… the famous rattler whose venom is redoubtable.”

“I was taken unconscious to a nearby hospital en extremis, but alive. As you might have noticed, the entire right side of my body is paralyzed.”

“My God, how horrible!” I exclaimed.

“Wait a minute young man, my story isn’t finished. Six months later, fishing on the flats in Belize, I was stung by an electric ray, which is why my left forearm is so enormous.  But the serious part was when, a few minutes later, I was maliciously bitten in my testicles and penis by a barracuda whose voraciousness, I may tell you, is not just a legend.”

“Listen, come with me to the toilets, I’ll show you.”

It was then that I understood where he was coming from, this poor man… on the pretext that my departure was imminent, I managed to get away and quickly blend into the crowd of travelers.

It was, once again, a narrow escape. 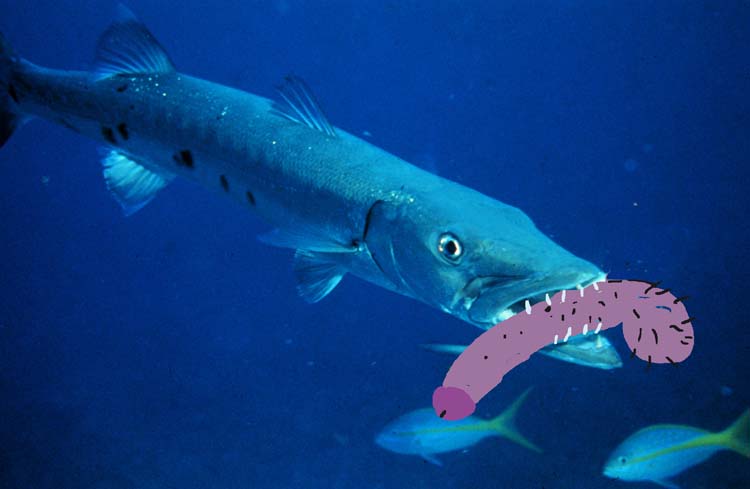