In the Hotel Lutetia, as on all monday mornings at 6 a.m., we have a staff meeting at the offices of le Mouching. Cyril, rising from his imitation Louis XIV chair, coughed a little, spit and took the floor.

“My dear collaborators, we have a serious situation (he always starts his discourses like that!), the great majority of our readers want articles about equipment, “fishing gear”! 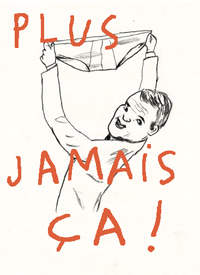 Crushed by those words, I didn’t even have the reflex to show him my marvelous index and to point out that I couldn’t give a fuck about the famous “equipment” and that the only thing that interests me about fishing is to, above all, have my toes in the water and let my prodigious spirit drift.

The next day when I returned home to the Ardeche, I jumped on my mobylette and to calm my prodigious homicidal spirit, I decided to check out the river.

It was the end of summer vacation and the river had returned to its magnificent splendor. To my great relief, the rare canoes and Kayaks had lost their garish colors. They had grown pale, almost delicate, a little like the Dutch couple trying clumsily to paddle their way through the rocks made visible by last week’s heat wave.

My prodigious eye was suddenly attracted to a strange bird. A man, of a certain age, was planted in the middle of the river; he was leaning with one hand on a sort of ski pole (surely to maintain his equilibrium) and the other hand held his fishing rod. He was bent over like a sioux warrior, like the Red Cloud Warriors ready to set a fatal trap for the vicious Custer and give a thrashing to his band of terrorists. Except that the gentleman in the river couldn’t see any US infantry (more and more rare in the Ardeche), he glanced instead at his bobber, as still as a rat’s cadaver hit by a bolt of lightening.

Occasionally the old man, tired of waiting for the miserable, invisible fish, wiped the sweat from his brow with the back of his hand. The time passed slowly and from the riverbank I could see the old man grow weary with fatigue. The sun was brutal, which didn’t help; it came down like a hammer and the old guy seemed to shrink by the minute.

Later on, he searched around in his creel and pulled out a sandwich wrapped in a paper bag. Even at a distance, I could distinguish with precision that it was a sandwich of mortadella, the give-away was the black olives slicing into the pink of the pork. He started devouring it; an enormous bite of his proletarian meal, aided by the pressure of his thin fingers on the bread, resulted in a big chunk of mortadella dropping into the river. Plouf! 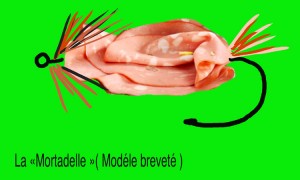 The miracle (because here we had a veritable miracle!), wasn’t long in coming… the nose of an enormous rainbow trout appeared 2 yards from the legs of the old man and greedily seized the chunk of mortadella with olives.

The wrinkled face of the old gentleman expressed a mix of undisguised surprise and  absolute desperation; it was clear that besides losing the chunk of mortadella, he had also lost his faith in the all-powerful lord.

Returning to the house that night, you can well imagine that I hurried to take advantage of the lesson learned by that singular adventure. I rushed to my vise and, then and there, I started to concoct an imitation mortadella, the patented model is of an efficacy without equal. As our readers have priority above all others, I now have the honor of giving you the mortadella pattern.

Well then Cyril, if this isn’t prioritized, first hand information on your blasted “fishing gear”… I don’t know what is! 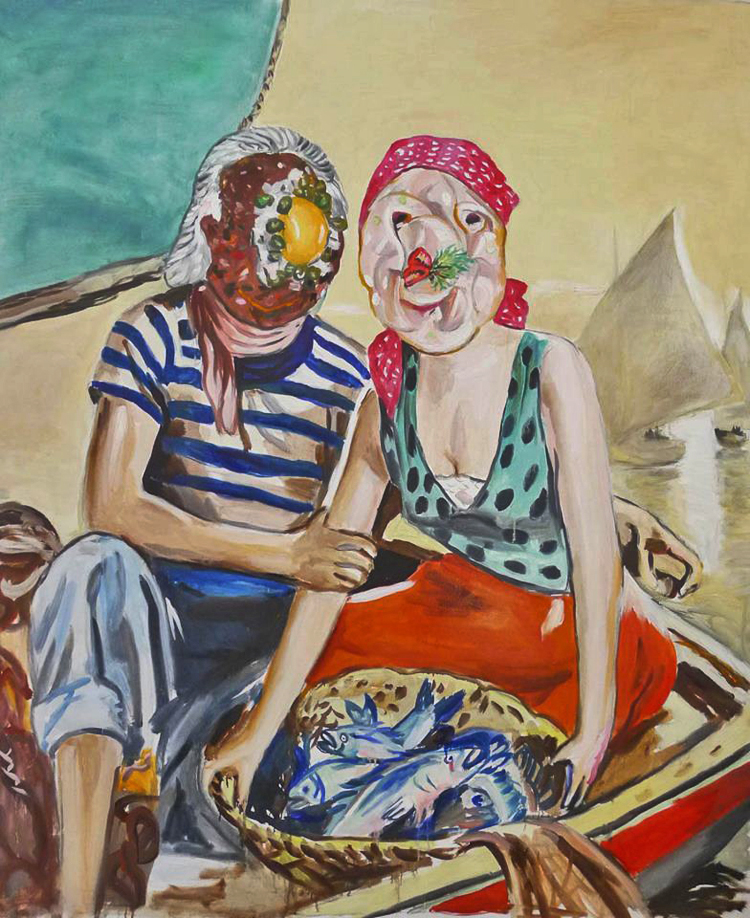