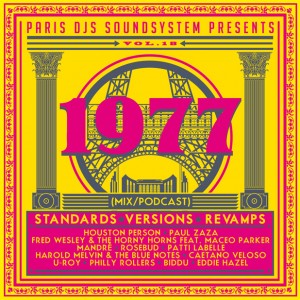 In 77, I had a fiberglass spinning rod, and thought that fly fishing was for old boring english people dressed up in tweed and corduroy. We used to all get in the car and drive hundreds of miles to go fishing rivers we heard had good trout in them. In the car we used to play tapes we had mixed during the week, and we played them loud! Those were the epic days, fishing till night and than cluubing ’til dawn! This mixtape: 1977 – Standards, Versions & Revamps Vol.18 by our friends fromParis DJ is a jewel and you should play it loud and already dance to it! Tonight, you’re the king of the dancfloor!

1 -Houston Person – I No Get Eye For Back
(from ‘Harmony’ album, 1977 / Mercury)
FELA KUTI cover, more info on wikipedia

There aren’t that many interesting Fela covers out there. Phirpo y sus Caribe did “Let’s Start” in 1971, which Jungle Fire re-did in 2012. Hypnotic Brass Ensemble did “Water No Get Enemy” in 2010. Wganda Kenya or Lizandro Meza did “Shakara” in the mid 1970s. And that’s nearly all. There’s another one from 1977 which you might haven’t heard yet: “I No Can Get Eye For Back”. Originally released by Fela in 1974 as the B-side to “Alagbon Close”, its cover version is saxophonist Houston Person 1970s jazz-funk recordings’ main attraction. A truly great dig, sampled by nasal rapper and p-funk lover Kendrick Lamar.

Canadian film music composer Paul Zaza released his first album in 1977. A sought-after cosmic jazz funk affair, in the same plastic disco vein as Jean-Pierre Massiera, in includes a nice funk-with-a-small-taste-of-boogie cover of the godfather of funk, available in vocal and instrumental versions, the latter being our pick here.

Produced by George Clinton and Bootsy Collins, with heavy participation by the P-Funk musical collective (including Garry Shider, Michael Hampton and Jerome Brailey), this first album from the former James Brown sideman is pure p-funk, guaranteed to please all P aficionados. The smashing cover of Parliament opening the record (and title track to their 1974 album of the same name) was one of the first compositions to feature the songwriting team of George Clinton, Bootsy Collins and Bernie Worrell (along with Fuzzy Haskins).

“Mandré” is Andre Lewis’ debut album, exploring a more electronic/disco sound — with some obvious Frank Zappa kind of eccentricity — than with his previous band Maxayn (named after his wife Maxayn Lewis). The Zappa cover “Dirty Love” was indeed our first pick of the album here, but the Barrett Strong one, “Money (That’s What I Want”), made famous by The Beatles in 1963, finally works so much better with the tune which follows-up in this mix…

Following up on the previous track, which stated that Money is what we want, here’s some conceptual continuity with a rare cover of Pink Floyd’s “Money” hit, recorded with the cream of French musicians in 1977: Jannick Top on bass, André Sitbon on drums, Claude Engel on guitar, René Gary on harmonica, Jean Schulteis on percussion, Claude Sahakian on the orchestration and mix, etc.

Written by Barrett Strong and Norman Whitfield, “Funky Music Sho Nuff Turns Me On” was a psychedelic soul hit for Edwin Starr in 1971, The Temptations in 1973, and Yvonne Fair in 1974. Patti Labelle’s take from her 1977 self-titled album doesn’t contradict the fact that this is one of those killer heavy funk songs leaving nobody sitting down!

The compilation LP “Let’s clean up the Ghetto” from july 1977 by the Philadelphia International All-Stars, is a whole lot of Philly soul’s big hitters joining forces to raise social awareness, fight povery and attract attention to relevent issues of the times. All the tracks are exclusive to this album full of gems, which closes with a heart-rending soulful cover of Fred Neil’s “Everybody’s Talkin'”, made famous by Harry Nilsson in 1969 in the soundtrack to “Midnight Cowboy”.

Everybody knows the Boney M version of “Rivers Of Babylon”. Less know it’s a cover of a 1970 song from Jamaican band The Melodians. And probably even fewer have heard of this cool deejay version by the Jamaican vocalist and pioneer of toasting U-Roy from 1977…

The best known version of Shuggie Otis’ “Strawberry Letter 23” (originally recorded it for his 1971 album Freedom Flight) is the one recorded by The Brothers Johnson and produced by Quincy Jones in 1977 (on their “Right On Time” album). A more upbeat funky instrumental version was recorded by Phil Upchurch around the same time. But it’s the one from West coast outfit Philly Rollers, also from 1977 which we ended up digging for this mix.

Today, everybody knows the song “Girl, You”ll Be A Woman Soon” from Urge Overkill’s 1992 version featured in Quentin Tarantino’s “Pulp Fiction” two years later. The tune was first a US pop hit for Neil Diamond in 1968. Nearly a decade later it was covered by Indian-British music producer Biddu, one of the pioneers of disco, Euro disco and Indian pop — and also the man behind Carl Douglas’ 1974 mega-hit “Kung-Fu Fighting”.

We close this mix with a masterpiece from P-funk guitar wizard Eddie Hazel, extracted from his essential solo album “Games, Dames, And Guitar Thangs”, a concentrated dose of guitar-driven psychedelic soul and loping funk-rock, co-produced by George Clinton and featuring the full Mothership crew.