As usual, I should say as every angler on Northern Dordogne we met  at Chez Maryse, the place to be accross the brige at Monceau sur Dordogne, not going to Maryse would be like going to Cuba and not spending time in Havana! That strech of the Northern Dordogne is the graal of the river! A river so rich that Grayling and Trout are big and healthy, but after trying to get those fish on our dries, we had to come to this conclusion: flyfishing is not good when the weather pressure is wrong and stroms are coming in! So our friend Grégoire who happened to also be probably the best guide on the river said: “let’s change pastures and go up in the moutain for PIKE! Let’s go up to Hautefage lake!” 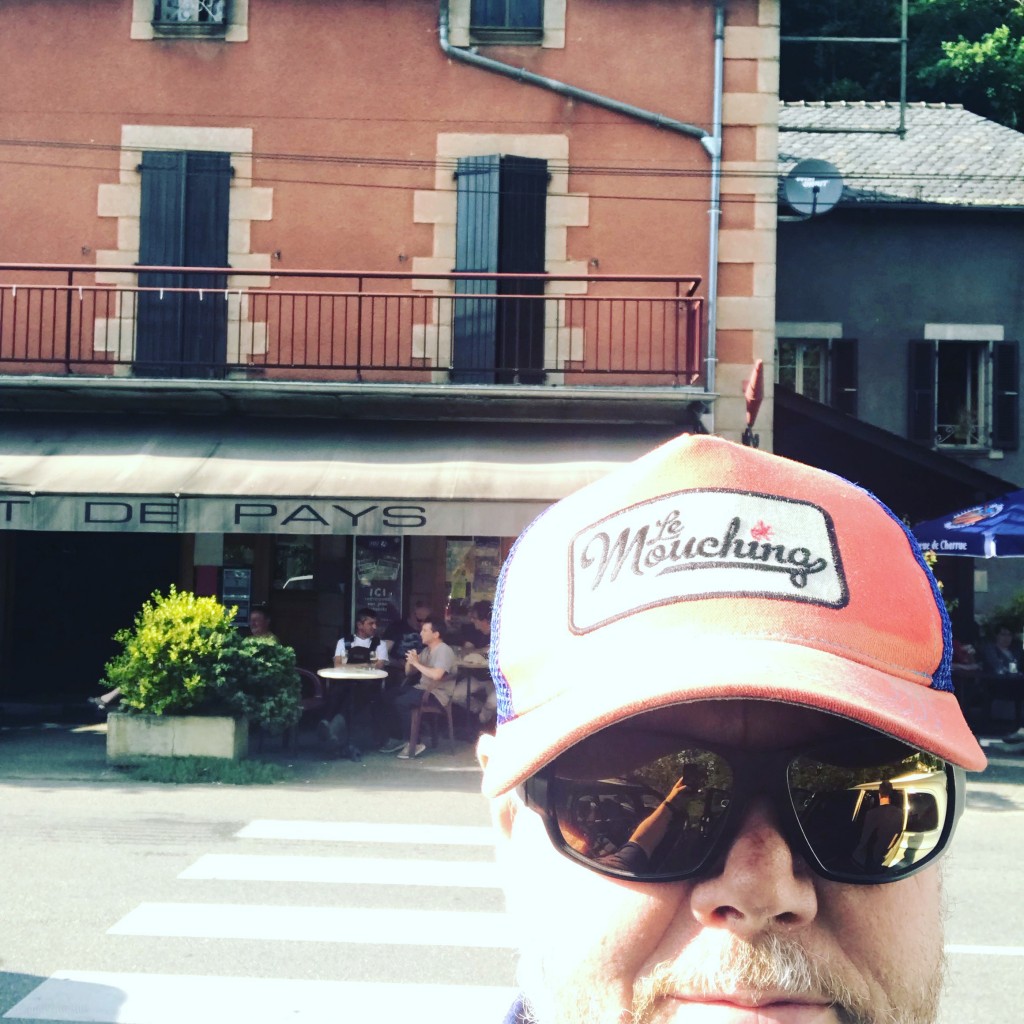 The road was climbing up endlessly and once we reached the top we didn’t even had time to admire the amazing view on La Dordogne river,  that we had to go down on the other side, we could see from the open roof the trees making like a tunnel over our heads as we were winding down to a little port, not even, just a ramp for boats. There, Charlie Touche and Patrick Taillard from Association des Guides de Pêche de la Corrèze (Fishing Guides Association of Corrèze) were waiting for us with their boats. 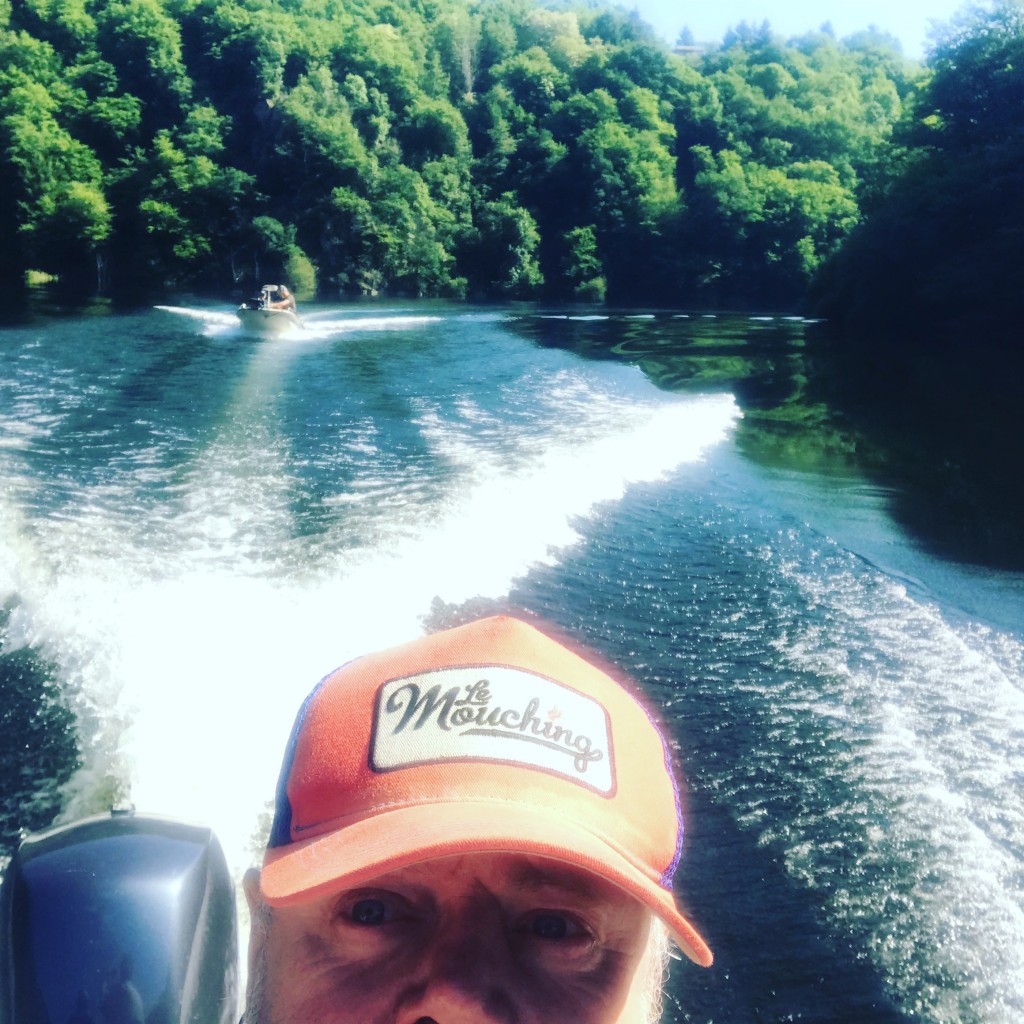 I had never fished for pike, or maybe once from the shore, but I didnt catch anythingthe only thing I got was falling in the mud. So here I was on a bass boat with the real guides for fly fishing for pike on the Dordogne area! 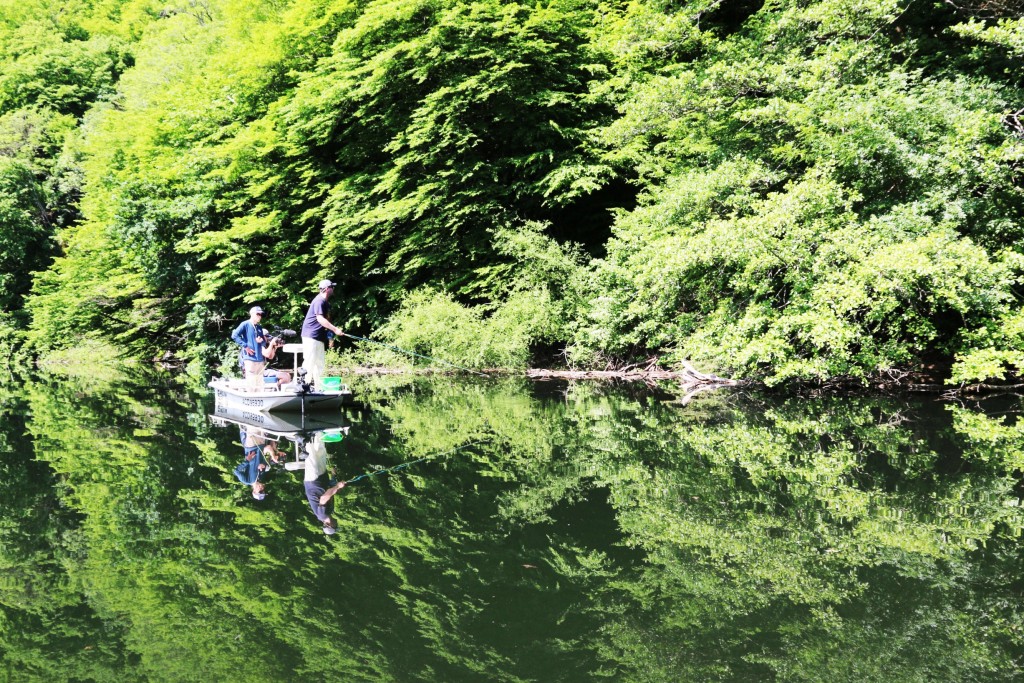 I was on a real bass boat, I had brought my 9#8wt and I casted, casted again and casted some more under the branches, under the trees, by the dead woods, I casted a streamer that looked like a chicken going to a Brazilian carnival! But I felt immidiately confortable, it reminded me when I go for Snook, Barracuda or Baby Tarpon and that you cast your streamers in the mangrove. But that’s not all that is similar, there is the boat, the guide, and you have to cast right underneath the branches (once you’ve set your mind to go beyond that invisible barrier that prevents you to cast your streamer for that last extra foot, and once you killed that fear of puting it in the branches, you’re good) than there is the voraciousness of the pike rushing to the fly! In fact the pike doesn’t really bite the fliy, it sucks it down! When it opens its mouth there is such a current made by the water going in and being expelled by the gills, that the fly is actualy vacumed! If the pike is hungry, there are a few chances he will miss your fly!

We did not have the best conditions to fly fish for pike, the foul stormy weather had been around for almost a week and it even snowed up the moutains and the fish, in general, don’t like pressure drops. So in the morning I missed two little pikes, one just over a foot and the other one only twice the size.Than storms started to come in and we had to look for shelter under the trees, just like with a tropical storm in the mangrove. 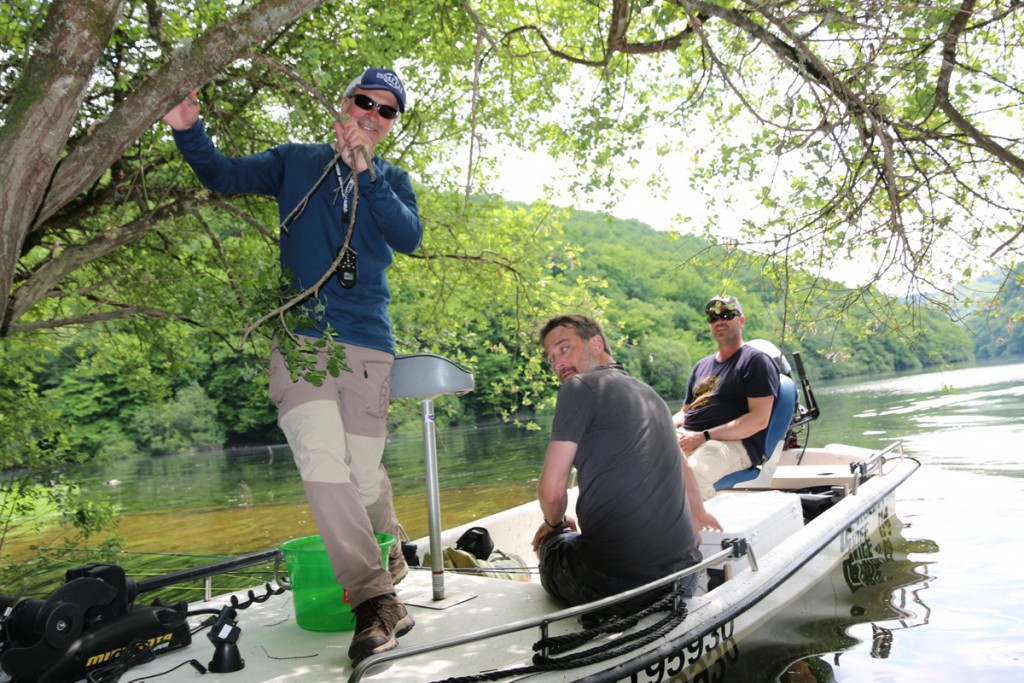 Shelter under the trees

In the afternoon once the rain stopped, everything changed, thanks to Maryse packed lunch I was ready to go again! Ready to catch my first pike on the fly! But nothing happened. Charlie who specializes in fishing for predators, tried for over an hour with a lure that looked like a real fish to me, but didn’t have more luck. He explored a whole side of that amazing lake, where the forest goes touching the water, like a wild forest nobody ever took care of since they built the dam 60 years ago. All along the shore trees are falling directly into the water, making a perfect habitat for Pike and Perch. But no fish came out to play with him. 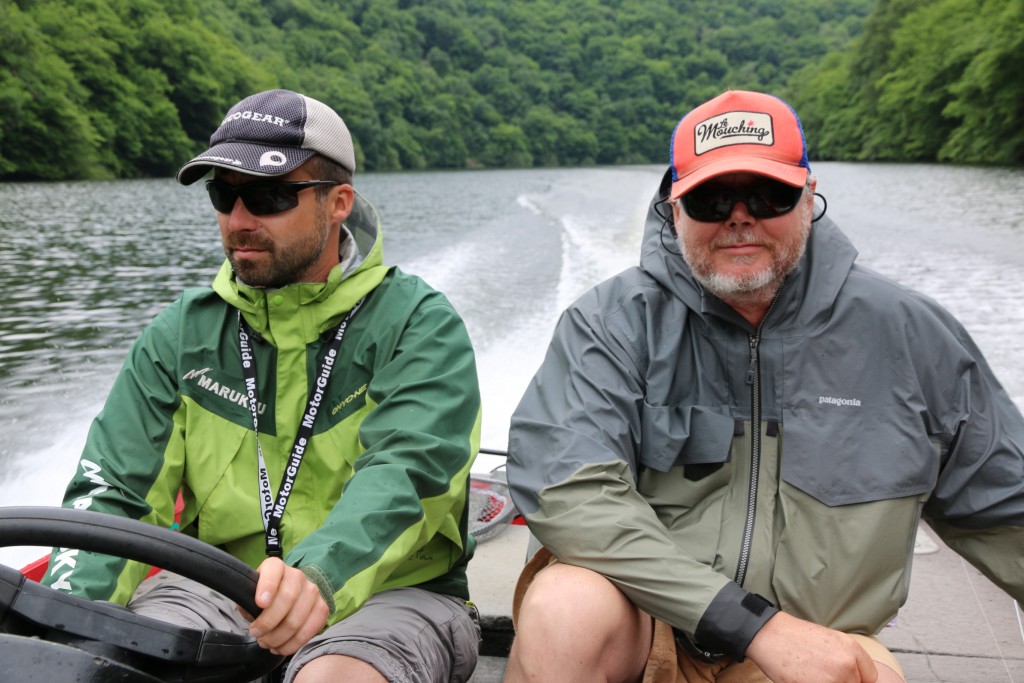 So there I am again, at the front of the bass boat, Charlie is using the electric engine and once more I’m casting my chicken on acid (my streamer looks more like a peacock bass than anything that can be found here) and I strip and strip again, I stop change the pace and cast again. I have been doing it for hours, my shoulder muscles start to be painful, than, suddenly, as I was loosing hope there it was, dashing from underneath the branches! So fast I hardly saw it, but I automaticaly set the hook and there it was, MY PIKE! Fat, strong and beautiful, the fight didn’t last very long but long enough to make me wonder if my rod would hold it. Charlie already had his net in hands and pulled the pike out of the water on the boat! We took the streamer out of the mouth (with long pliers, you don’t want those 700 teeth to bite your fingers!), we mesured it (34 inches of pride!) we took the usual picture and we put it back to the lake. It felt like slow motion, the pike (of beautiful colours) slid slowly into the black waters. 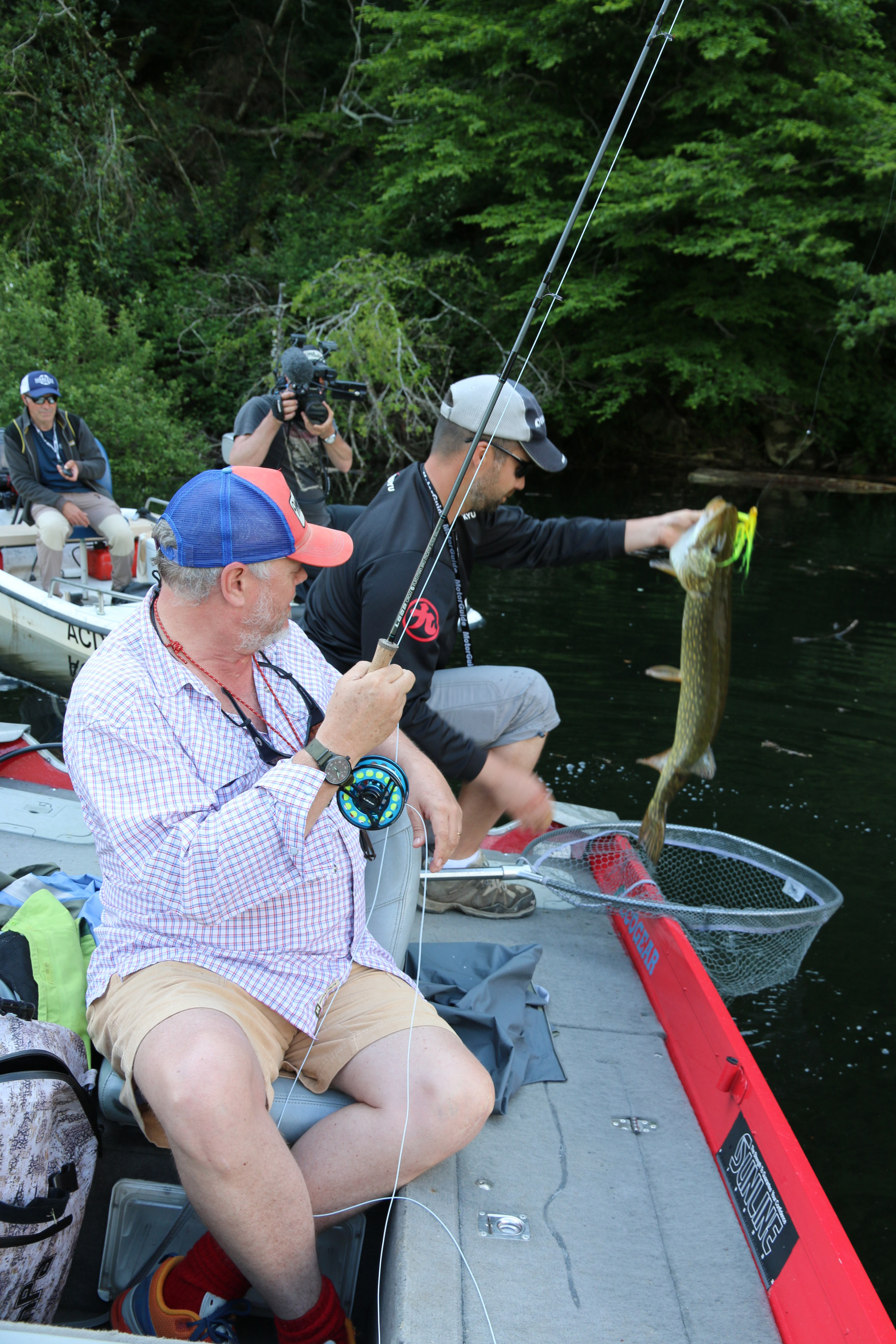 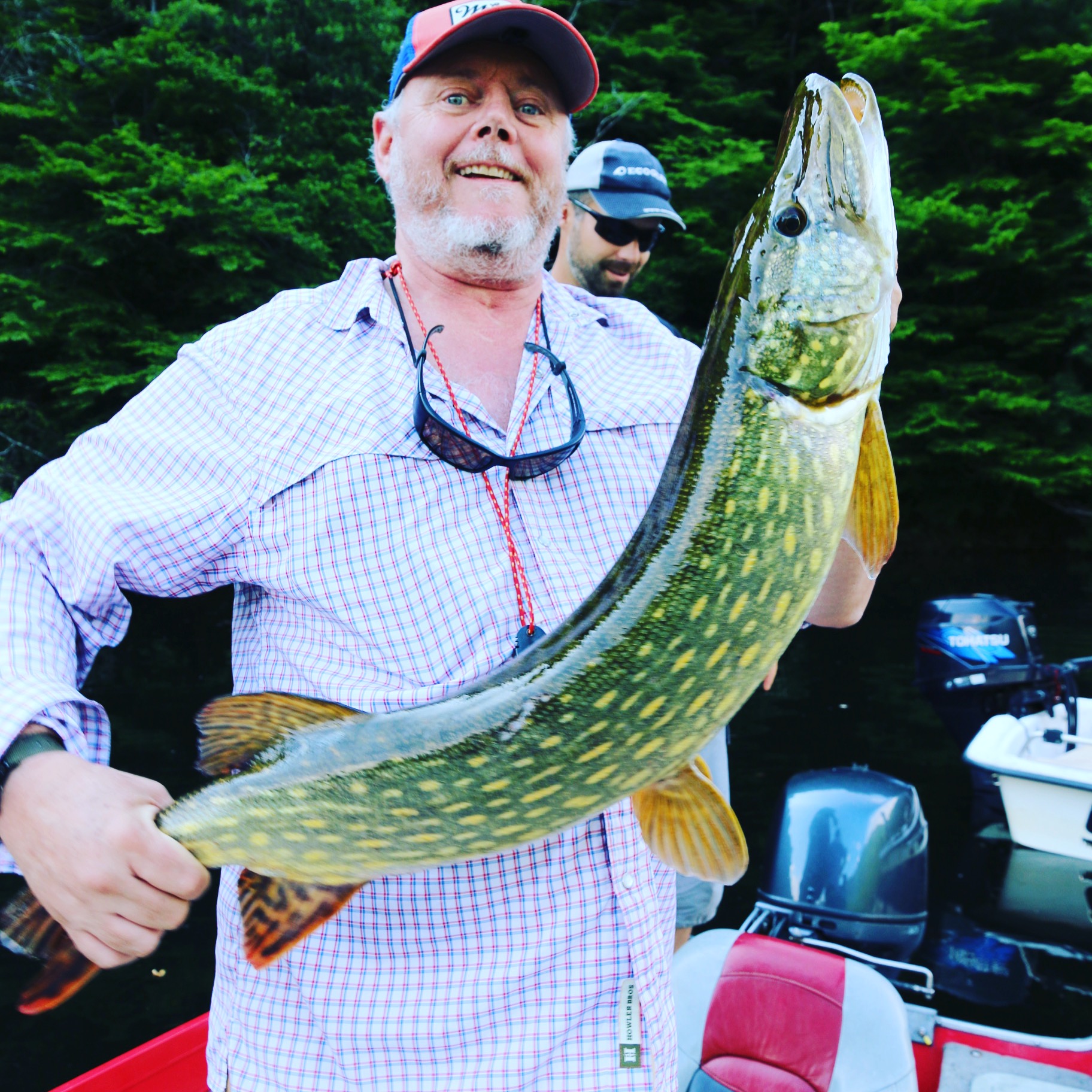 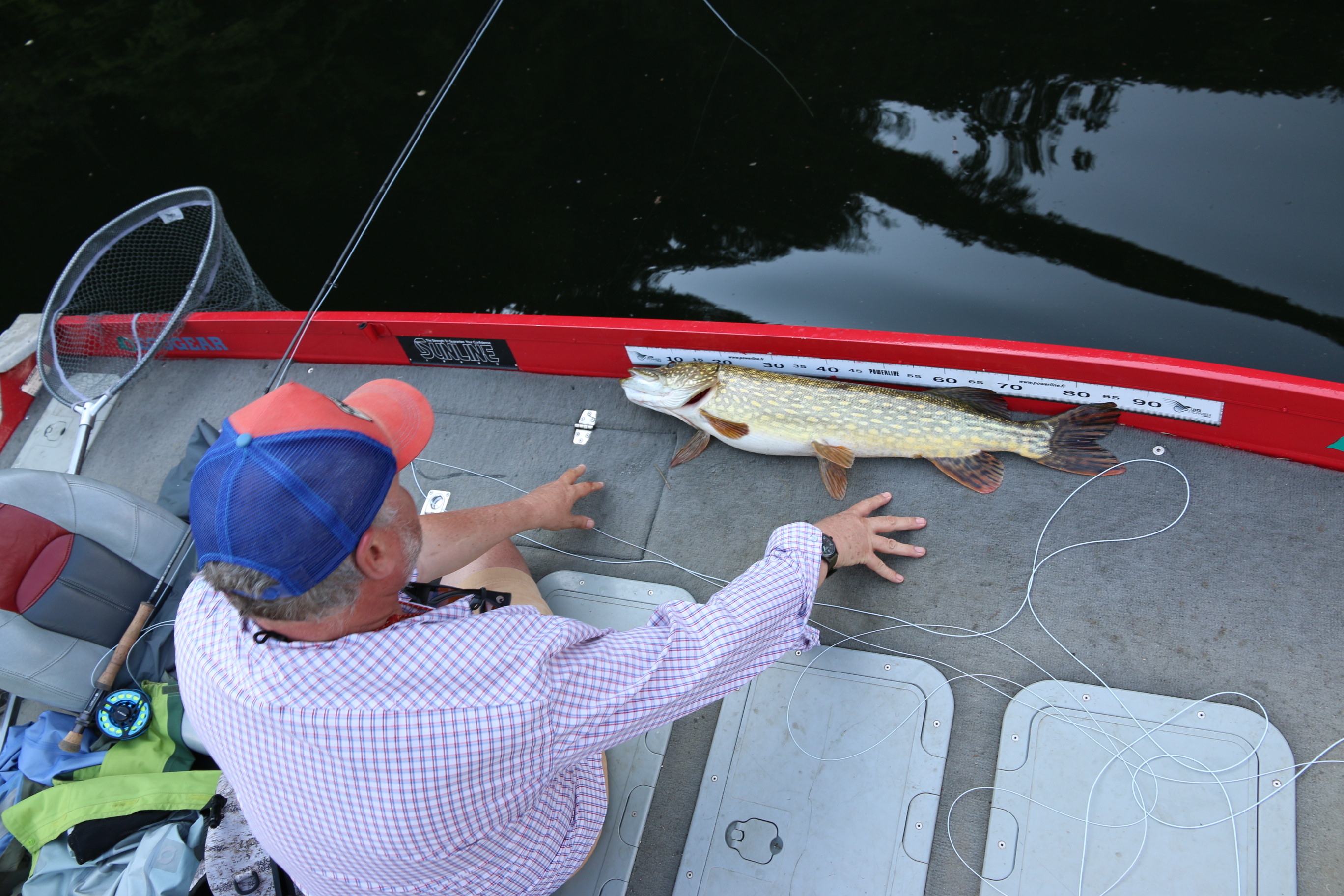 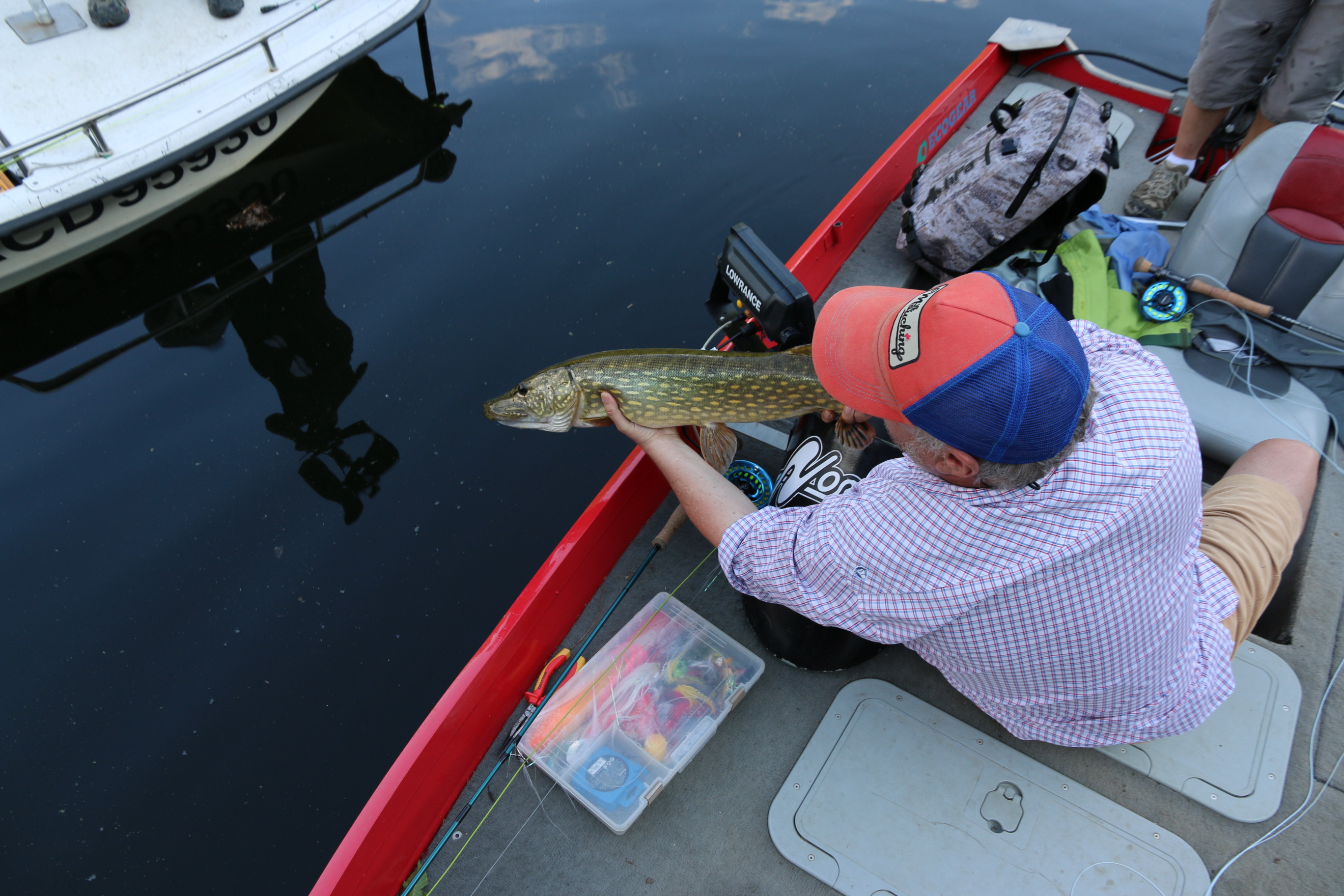 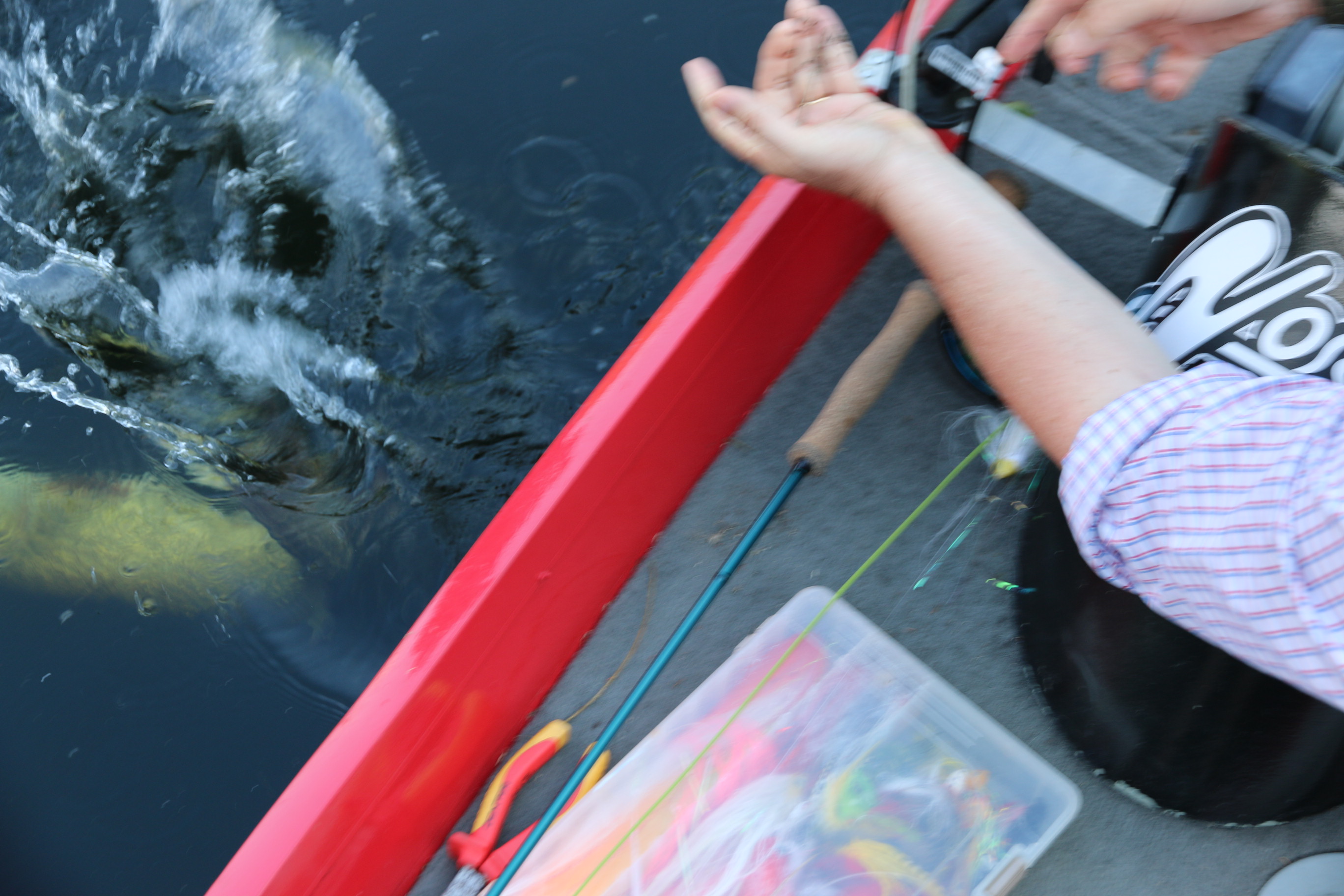 I was so happy, we were so happy! Can you imagine fishing with the three best fishing guides of the area and not catching a fish? That would be have been a curse! All we need now is to go back Chez Maryse to celebrate, I need a good massage for my shoulder, 6 hours of double haule have killed me. So there we are, in the middle of this amazing lake, speeding back to the cars. I cannot talk, it’s pure bliss. I havent felt that good in a long time. As I am looking at the forest and the landscape I’m talkig to myself: I am going to become a Pike flyfisherman, I just love it! Thanks Patrick, Grégoire et Charlie ! Thanks La Corrèze ! 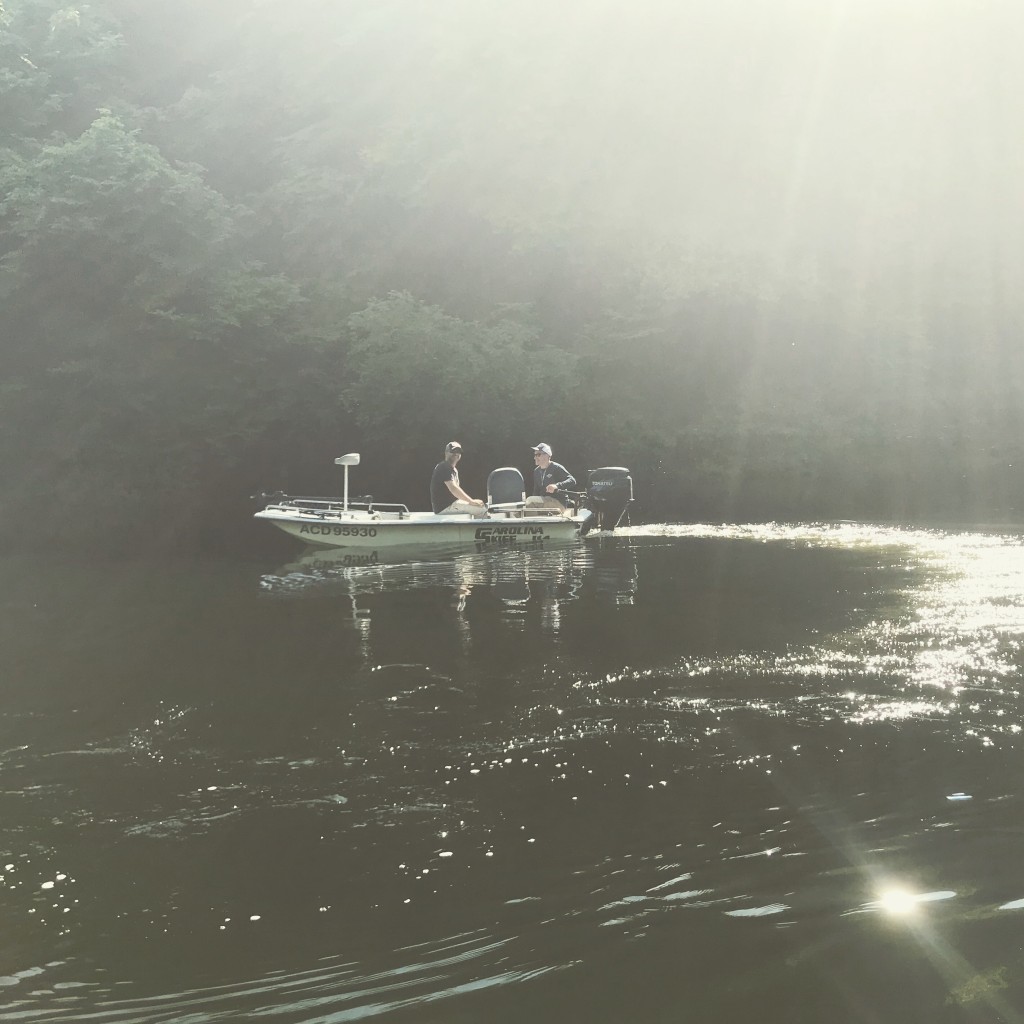