The first time that I received the anonymous letter: “3 times a week your wife is cheating on you with the electrician.” I immediately thought it was a joke from some guy who thought of himself as Mata Hari’s son in a dark, dumb film. And then, after the fourth identical missive I could smell that something was not kosher. On the morning of March 26, instead of going to my office I hid myself behind Salim’s (the arab 7/11) just opposite my building. 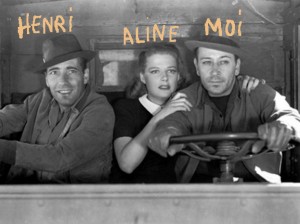 It was around 9:30 that Henri, that piece of garbage, arrived; he was all slicked up. He slid our of his Peugeot 104, took a quick admiring look in the rear view mirror and a last spray of “Good Breath” and disappeared into my building.

So, Henri was the bastard, the two-timer. Me, his friend for years; me, who invited him every week to a dinner that I prepared with love; me who opened the best bottles of wine (friendship has no price) in my cave for him and set out the monogrammed napkins. Never paper towels for Henri! And now, voila… that garbage is banging my wife!

Instantly a diabolical idea germinated in my head. I’ll invite him to go fishing (he adores that) and that’s when I’ll get him, that fucker; I’ll slit his throat with my Swiss Army knife and I’ll tell the police that we were attacked by Roumainian immigrants or something.

The following Saturday the two of us were in an isolated corner on the shores of Lake d”Enghien. Henri was comfortably installed on his folding chair, each of us had a fishing rod on a tripod to leave our hands free for the cans of Kronenberg. Henri rolled himself a cigarette with “Caparol” tobacco; it stunk and really made me want to vomit, but I had only one thought: to skin that fucker alive!

After a short time I pretended that I had to take a leak, so I got up and slowly opened my knife passing to the back of Henri; he’s going to pay for it now! I’ll make him bleed like a pig. At that exact moment Henri cried out: “Fleche, Fleche, I have a fish on, check it out, it’s not a little gardon!”

In effect, glancing over his shoulder I could see the bobber bouncing all over the place. “Henri, control yourself, give him some line. Don’t pull like that or he’ll break your line… slowly, don’t tighten up… Yes…, that’s it… Gently, pay attention, he’s going to run again.” Twenty minutes later the fish was in my net. A huge, enormous Carp as beautiful as Monica Vitti. With scales as large as my thumb all shimmering, glimmers of orange, rose, gold and dark purple. Pure enchantment…

When we released the fish, the two of us were inconceivably happy. I had completely forgotten my project of murder and my cheating wife. We were laughing like little kids and the Kronenberg flowed like champagne. And then in the late afternoon we headed to “OUR” house. 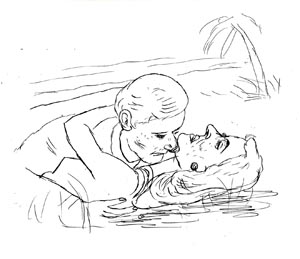 It was when we opened the door to my house that our life changed. Jean-Claude, the butcher from Piat Street was banging away at my wife who was spread across the table. His fat ass was partly covered by his bloodied butcher’s apron and Aline was screaming out like a heifer. One would think that we were in a Soutine painting. Jean-Claude looked at us threateningly and continued slogging Aline as though we were an old pile of dog shit. Sickened by the scene, Henri and I left the infernal theater, crossed the street and headed for the nearest bar.

A few days later we decided to set up house together. Henri and I found a 2 bedroom near the gates of Bagnolet and every weekend we go fishing together at the Lake d’Enghien and life is sweet.

Of my life since then I only regret one thing: the monogrammed napkins.