We baptized it “River House”, our patched up shack on the river two hours from New York. Not a very original name to be sure but we didn’t care. It was a house for lovers, like us, who hungered to play the hermit and live naked  in nature without being bothered (see “Roundout Creek” in the archives). 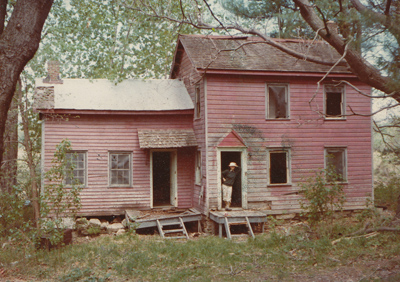 And for me the river was a playground without equal. Everyday I discovered hidden marvels. Black bass in abundance, monster carps the size of cows…  once, just behind a little current, amongst the undergrowth, I spotted the nose of a Brochet. Oh, not a huge one like the photos in fishing magazines; no, just a nothing little nose.  Luckily, that morning, I had clumsily mounted a little streamer made of clump of my wife’s hair and two green feathers from the stomach of Loro, our amazonian parrot.

So, with the stealth of a Cheyenne warrior, I flung the lamentable lure right in front of the pickerel (that’s what they call the little Brochets in America) and slowly agitated it.

I didn’t have to wait. The fish, annoyed, jumped at it! I set the hook, brought him in and quickly released it. The next day, who do I see but Zatopek (that’s what I named him) and… all over again I take him in the same fashion.

Zatopek, I must have taken that fish five or six times and each time that I returned him to his freedom he looked at with a dark eye that clearly said: “You’re going to continue antagonizing me? You think it’s funny, you little piece of french shit?”

Until the day when we had a guest for the week-end, Bill R., an old friend of my wife, a pretentious Swede that I grew to detest from the first moment. He wanted to fish the Roundout and show me his new rod that cost 3 million dollars and his waders in gold-leaf and all the rest. 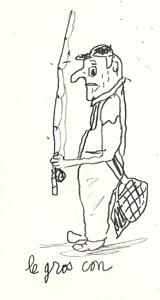 This slicked-down Swede was here to impress me; me, who could only afford a miserable $50 rod at Frank’s, with a line that resembled a clothesline !

But when I really wanted to kill him was when he captured “Zatopek”, him with his $500 streamer on a hook with barbs that took at least 5 minutes to remove from the mouth of “Zatopek” who was bleeding terribly and who disappeared in the current, belly up…

After that he was “persona non gratta”, unwelcome at River House, this terrible guy almost made an “anti-swedish” racist out of me.

Fortunately, in Paris I was friends with another Swede, a really terrific guy and a great artist, by the name of Bengt Lindström.

We worked often at a lithographer’s in the 13th arrondissement during the day and at night Bengt, who was built like a Hercules, and I would make the rounds of the bars in Montparnasse.  My god he could drink! Impossible to keep up with him. One day he decided to visit his friends in Lapland so he took his little plane to the very north of Norway and landed on the runway of an airport in Cap Nord. He gets out of his plane with a bottle of whisky in each hand and slides on the icy runway but, in order to save his 2 precious bottles, he holds the bottles up high and takes the blow on his elbows, which of course he breaks, both of them! But saves the bottles! Now that’s a real great Swede, the kind that we love!