Rene… every saturday he was at the les Vans open market. He sold his eggs on a small folding camp table, next to the stairs of the church. There were never more than 3 dozen eggs, surrounded by branches of parsley to “decorate” them.

One day, intrigued by the character I stopped and bought 6 eggs and as things happen, we became friends.

After the market we would have an aperitif at the Cafe du Midi and little by little he told me the story of his life.  Gloomy. To earn his living he had 6 laying hens. He lived frugally mainly through the sphincter of these hens and along with his little garden, he managed for better or for worse, to support himself and his wife Gloria.

For my part, I told him about fly-fishing with all of it’s joys and emotions and I could see that Rene was really moved by my stories.

So much so that one saturday he secretly whispered the news: “My mother, God bless her, kicked the bucket about two months ago.”

She was taking flowers to put on the grave of her husband when she tripped on a forgotten hose and cracked her skull on the cross of her husband’s tombstone. Instant death. “Saved on the transport to the graveyard” said certain mean tongues. Anyhow, my mother left me a small inheritance. It’s not much, but with it, I’ve decided to change my life. Because of all of your stories about fly-fishing I had an idea, I’ve given it a lot of thought and reached a decision: I’m going to open a fishing store!”

“Well, that’s fine Rene, where are you going to open your store?”

“Well, where I live, at my house. There’s room and the rent is cheap.” 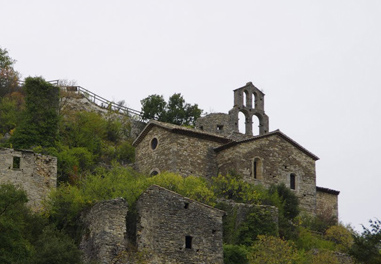 I have to tell you, dear readers, that Rene lived in the Ardeche, in a tiny, mostly abandoned hamlet above the village of Bessas.

“Rene are you crazy or what? The nearest river is twenty kilometers from your house; do you really think that clients are going to break their necks to get to you?”

“Fleche, my friend, if there are no fishing stores near me, it means that there’s room for one!”

What can you say to that? Nothing!

Two weeks after that conversation, Rene invited me to the opening of his store.

On the door he had nailed a piece of plywood on which he used “Red Devil” to paint: FISHING STORE. The inside was hastily painted in veronese green and unfurnished except for two empty bookshelves, one chair and a kitchen table on which was a cash box.

To make the place a little gayer Rene pinned an old Postal Service calendar (1951) with the picture of a Fisherman in action. 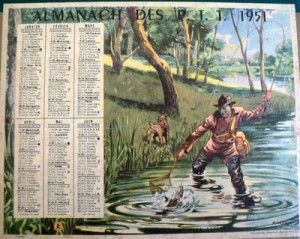 And it’s true, it was beautiful. Minimalist, but undeniably beautiful… in it’s style.

The night before he had received a package from Kenya containing an assortment of flies; feverishly he opened the package.

“Fleche, look how beautiful these flies are. They are real works of art, aren’t they?”

“Right you are Rene, they are splendid and what’s more, I’ll be your first customer. Kindly put 2 of those imitation ants in a little bag.”

“Wow, that’s a good sign for success, that’s the luck of the devil.”

And the devil was surely there, for one month later, he closed the shop. His wife, a detestable shrew, left him for the candidate of the Front National from the Vaucluse and his 6 hens were slaughtered by a hungry fox.

But Rene didn’t cry for long; one fine day the young lady who mounted the flies in Kenya got on a plane and showed up to take the place of the shrew, jumping right into the marriage bed. 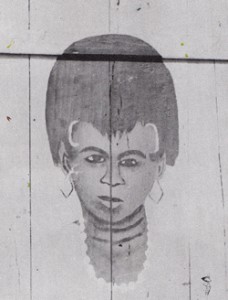 And what a girl she was!  Never in the department had we seen such a pretty face and a lovely presence. And that black skin was so beautiful and so soft. And her laugh! She laughed all the time, the lovely LULU (that’s what we called her because no one could pronounce her Kenyan name.)  It was a real benediction to see her throw herself around Rene’s neck and cover him with loud kisses.

One day she decided to open a little greasy spoon in an abandoned barn in the hamlet. She cooked the dishes from her country, delicious but so spicy that it made the clients cough and breakout in a cold sweat. But LULU was so lovely to look at that the clients came back regularly and filled Rene’s cash box.

“You see Fleche, fly-fishing is super, but without love it’s not worth a hill of beans!” 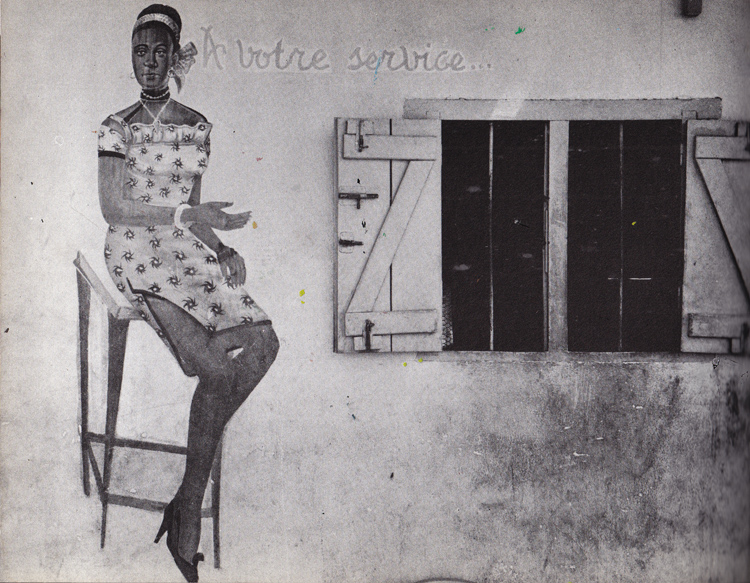