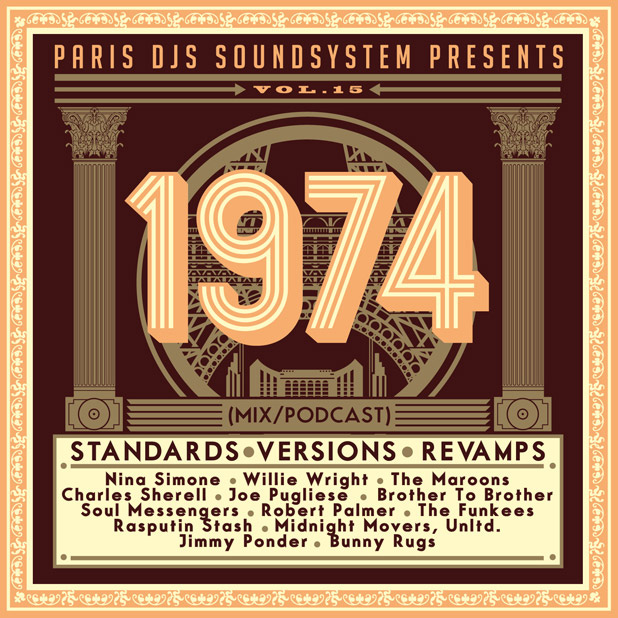 You’re comfortably seated behind the wheel of your Mustang, warm wind coming through the window, smell of leather, you’ve got your shades on your eyes, it’s time to hit the road, you push the 8 track cartrige, push up the gas turn up the sound, the road is yours! Here’s 45 minutes of groove, but I say grrove it’s GROOVE! This time, if you want to listen those 1974’s jewels picked by Paris DJ, just CLICK HERE, and to download this supakoolgroove: just right click ! Enjoy.

The year is 1974. Early disco is upon the music scene. Pre-selections of cool records with interesting cover songs are starting to become tighter. But no worry! The diggin craze (also called “Dig-Fu” in our inner circle) is infinite. The more music you know, the more you have to discover. Jazz, soul, reggae, funk, library music, New Orleans backbeat, fusion, Nigerian Afro-rock… there’s no real big surprise here, just cool versions of classics with a whole lot of feeling, carefully handpicked.
Note : We played a sneak preview of this mix at our weekly ‘Tour Operator’ gig at Le Pigalle Hotel on january 28, just before Erik Rug and Grant Phabao’s DJ set.

We open with a true classic. Nina Simone’s soulful take on Hoyt Axton’s “The Pusher”, written after one of the songwriter’s friends died of a drug overdose, and made famous by Steppenwolf in the 1969 movie “Easy Rider”. This is priceless and will just never age.

Strangely, we never played this superb cover of Curtis Mayfield on Paris DJs’ podcast before. It was released on a 45 in the mid-1970s, one year after Curtis’ original, and appeared on many compilations since then. Maybe you’ve grabbed it already, it was reissued a few times, including a 12 inch pressing on Jazzman Records in 2007 and a 45 one on Numero Group in 2011.

One of the landmark recordings of early disco music, “Rock Your Baby” was a massive hit for American singer George McCrae, released in april 1974, and number one on the charts in july. The Maroons (a.k.a. The Cimarons) released a reggae cover version in Jamaica on august 9, the same year. Enjoy the very cool laidback groove… and the strangely out of tune piano!

James Brown bass player Sweet Charles Sherrell recorded the 1967 Sam & Dave hit “Soul Man” on his 1974 debut solo album on Brown’s People Records label. This LP is Papa James’ first venture into the lucrative sweet soul field, its most well-know cut being this killer latin-ized version of “Soul Man”, opening with a tasty break sampled by Eric B. & Rakim, Pete Rock & C.L. Smooth, Nightmares on Wax and a few others.

A one minute something cover of Dennis Coffey’s “Theme From Black Belt Jones” picked on a library record aiming at modern jazz dancers (check the LP artwork above). The beginning of the tune is BIM! In your face!!

06. Brother To Brother – In The Bottle
(from ‘In The Bottle’ album, 1974 / Turbo)
GIL SCOTT-HERON cover, more info on wikipedia

Gil Scott-Heron’s famous tune “The Bottle” is a standard in our book – even though we didn’t play it in our 2011 Tribute Mix. Brother To Brother were an early 1970s American soul band from St. Louis, signed on the Turbo label run by Sylvia Robinson (who would go on to start Sugar Hill Records later on). Their umtempo cover of “The Bottle”, re-titled “In The Bottle”, with sweet flanged-out vocals, electric piano riffs, and the same kind of flute solo you could find in the original version, is just fabulous.

Brooklyn, New York band B.T. Express released in 1974 the album and single of the same name “Do It (‘Til You’re Satisfied)” and both would become number one on the charts. In Jamaica, radio was playing the American hits of the time and bands would rush into the studio to record their own version. Not to be mistaken with the Israel-based band of the same name from the same era (see info here), the Soul Messengers, another alias for Jamaican band The Cimarons, recorded a vintage, soulful, roots rockers cover of the B.T. Express hit. Wicked reggae funk on 45!

Robert f*cking Palmer indeed. Did you know the man recorded a supa-funky album with The Meters and Lowell George (from Little Feat) in the mid-1970s? This was his first solo LP after three albums with the Vinegar Joe band, actually. We were introduced to this record by Phish (the greatest live band in the world for the last two decades) in the mid-90s, through their frequent cover of the title track written by Allen Toussaint and made famous by Lee Dorsey. But anyway. If you haven’t heard it already, you should already be trying to download the full album, ever since you read “backed by the Meters”!

We podcasted the A-side of the Funkees 1974 seven inch, more than 5 years ago. A super cover of War’s “Slipping Into Darkness” which you can still grab over here, which has also been reissued through Soundway Records’ Funkees compilation “Dancing Time” released in 2012 (full info here). On the flip of the original 45 was another cover : “Break Through”, originally released by American rock band Atomic Rooster in 1971. An electrifying afro rock cover!

After a Sly Stone-influenced first album (as Rasputin’s Stash with and apostrophe “s”) on Cotillon records in 1971, eight-piece Chicago band Rasputin Stash released on the Gemino label (a subsidiary of Curtis Mayfield’s Curtom label) a second self-titled LP, but were now down to a four-piece. The album, less uptempo than the first one but as magical, sold poorly, Gemino closed doors soon afterwards and the story kinda stops here sadly. Thankfully in 2000 a CD reissue happened on Sequel Records in the UK, with no less than 10 bonus tracks, 6 of which previously unreleased, including this just perfect 8 minutes cover of Al Green!

The musicians from the Midnight Movers played on too many hits to count. They were also one of the best American soul live bands, perhaps most famous for their decades-long collaboration with Wilson Pickett. Described by Dusty Groove as “One of THE psychedelic funk masterpieces of the early 70s”, their “Follow The Wind” album from 1974 is indeed pure gritty party funk, as proven by this cover of The Doobie Brothers hit bar song from 1973.

American jazz guitarist Jimmy Ponder only released one album on the Cadet label, greatly sounding CTi-ish fusion LP with strings arranged and conducted by Bob James. The Beatles cover and title tune, with its fuzzed-out guitar became something of a latter day break-beat hit, but really, who can resist this kind of funky mellowness?

Many years before becoming a wolrdwide hit for Massive Attack in the early 1990s, “Be Thankful for What You Got” did the same for William DeVaughn, selling nearly two million copies on its release in spring 1974. The song is such an instant classic that in was instantly covered, the same year, by Arthur Lee & Love (played in this mix from 2012), Donovan Careless (played in this mix from 2008), and Bunny Clarke. Also know as Bunny Rugs, or Bunny Scott, he recorded some singles and the solo album “To Love Somebody” with Lee “Scratch” Perry at the Black Ark in the mid-1970s, before becoming the lead singer of Jamaican reggae band Third World.