They came from France, Gilbert and his zaftig girlfriend; they came to go salmon fishing with me. They came 3,728 miles, plus an additional 4 hours by car (from my hole in Pine Hill hole in the Catskill Mountains); they came to freeze off their balls on the famous Salmon River, near Lake Ontario.

On arrival they were so tuckered out they couldn’t even speak; I never saw them like that! But, departure was at 3 in the morning, in the fog; the old Dodge, as usual, was grimacing. As dawn broke we saw the first of the billboards on the highway announcing the Eldorado of fishermen: “PULASKI THE CAPITAL OF THE EAST… 10 miles”… “FISHERMAN’S DREAM!”… “FISH ON, 12 months of the year”.

And it’s no joke, I swear, the place is really worth the trip. It starts to become real serious at the end of summer when, in the inshore rivers, all sorts of salmon return to Lake Ontario, all lined up one after the other: Cohos, Kings. When it gets cooler and continuing through the winter, it’s Steelheads and large lake trout and Black-bass… As much as you want, they’re there!

In Pulaski there is not a dead season. And the locals are more clever than you or me put together.

Today there’s money to be made with fishing and in the region, every aspect of the economy greases it’s palms. In this town, at anytime of the day or night, all of the fishing stores are wide open! And you have to see what’s inside!! They are really candy stores for fishermen. You simply ask “What flies do I use for today’s fishing?” and the salesperson will pull out the complete panoply for that day, kind of like a drug dealer at the playground when school lets out. “The fatal fly for today is a secret, but for you buddy… as I love France” (fawning liar) etc… and we leave the store with $200 less in our pockets. The river goes around and around, the whole length of this village of crazies. Everybody that you pass on the street is wearing slippers and fishing vests, they walk with a heavy gait: dragging their cleated shoes along the asphalt. It makes a “schriiiiiiifff” and “schraaaaattt” sound that is pleasing to the ear and their appearance pleasing to the eye: trailing their fishing rods like Roy Rogers or Hopalong Cassidy trailed their Winchesters in the old westerns. 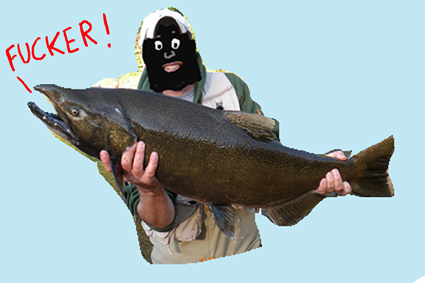 Some guys, with long cords drag along enormous King Salmons like Neapolitain Mastiffs… leaving their trace of drool on the sidewalks. It is so distasteful and vulgar that it becomes beautiful, like a biblical image. Visions like that can’t exist for real. Especially when you just arrived from the Var.

Gilbert was suddenly aroused and the shock was violent! “Damn, what the hell is that…a salmon! Fuck, I must be dreaming! Damn! That one is towing another… two!!!”

I never saw Gilbert pull on his neoprene waders so fast! He was trembling. HIs suspenders were on backwards, but finally he was dressed. “Shit, now I have to take it all off, I need to piss!” And voila… there we were, finally, on the catch & release Douglaston Run, the best spot on the Salmon River!! You have to buy a permit for the day, but it’s like at the psychiatrist: if you don’t pay, it doesn’t work. Gilbert was in heaven!

He cast out a fly, then recast… and cast again. He was all red, not only from the cold I think, but the pleasurable thought of all those virgins that might be taken. If only it could be a female salmon that would be perfect! Then all at once, when we least expected it, having been distracted by the beauty of the water running between our legs… I hear my friend HOLLER: “Fleche… Fleche… fuck… I have a fucking… what do I do… fuck, Fleche!” And it is true that something serious seemed to be wriggling at the end of his line. His rod was bent in two and even over the roar of the water I could hear the whine of his line emptying the reel.

“Gilbert… don’t fuck around… run behind the fish! If you stay in place, it’s good-bye friend, the line can’t take it, not for a second! Run, I said! It’s your only chance!”

Even today, I still don’t know how Gilbert didn’t break his skull, his legs or his two arms; running half in the water, on rocks as slick as soap and with that beast at the end of the line… I tell you, it was a miracle! Watching him I kept thinking about all of the red tape required to get my friend’s dead body back to France. I’d have to call his mother in Marseille… the French Consulate in New York…

Normally I don’t believe in God and Santa Claus is for children, but that day, well… Twenty minutes later a salmon is in the arms of my friend. A splendid animal, a big male with a powerful jaw, a KING SALMON like one sees in fishing magazines that make us dream and that we dismiss as a big joke for the jerks like us and it simply doesn’t exist… then you say that you’ll never again buy those dumb magazines! And yet, there is the proof, right before us, dripping, scintillating and my friend is dripping even more than his “submarine”. 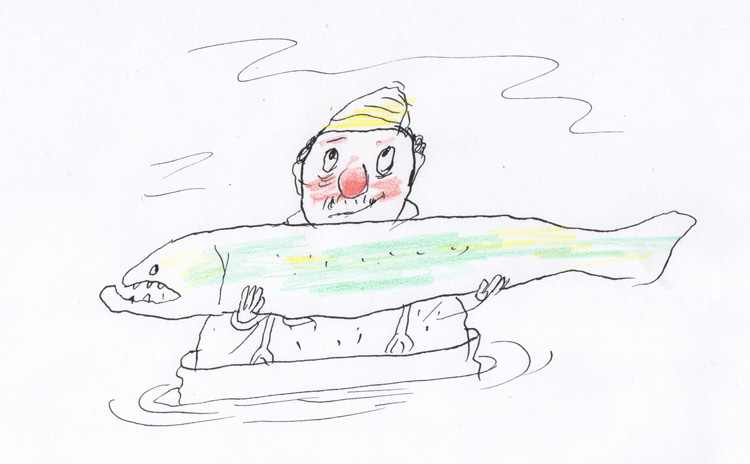 “Fleche look in the pocket of my vest… get the camera… yes, go ahead… We’ll show my friends at the ” CAPORAL” bar/ tobacco… They’re going to make a long face… and, they won’t believe it, so take a lot of pictures!”

So I machine-gunned Gilbert from all angles. It was his smile that was the most impressive. He couldn’t stop smiling, he would have cramps if he didn’t stop smiling… and an orgasm if I don’t hurry and finish the film.

On the trip back things deteriorated rapidly. We were on the road when Gilbert started searching his pockets for his camera.

“Fucking camera… where is that bugger?” Gilbert grew more and more tense. “Pierrette… Have you seen my camera?”

The fact is, taking advantage of our stop at a gas station near Syracuse, Pierrette dumped the paper bags containing the garbage from our lunch… the orange peels, the shells from boiled eggs, the breadcrumbs AND (without knowing) a black plastic bag with the notorious camera, the only irrefutable proof of Gilbert’s victory over his salmon…

His blood was already warm, but the realization of the ignominious act made his blood boil. He’s going to slit her throat on the highway… no doubt about it, a couple of slashes with his Opinel knife… I can feel it coming! And she’s going to gash his yes out with her nail file… Instantly I thought about having to ship TWO bodies back to France… the French Consulate etc. And… another miracle, the second of the day: on the radio Nat King Cole started to sing “Unforgettable” and with the Rahat loukhoum (honeyed, turkish delights) smoothness of his voice, things calmed down and the carnage was put off for another day. (A sure sign of the existence of God…).

The next day, when they left my house still alive, I must confess that I was quite relieved. They divorced a short time later.